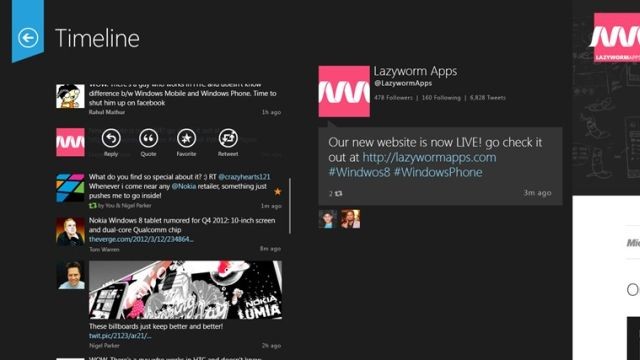 A few weeks ago, we reported that the popular third party Twitter app Tweetro for Windows 8 had been removed from the Windows Store. This was due to the app, from developer Lazyworm Applications, using up its allocated amount of 100,000 licenses. Under Twitter's recently revised rules for third party apps, none of them can go above that amount.

Today, as promised, a new and paid version of Tweetro is now available for download in the Windows Store. The new version, called Tweetro+, is priced at $9.99. In a recent interview with Lazyworm Applications co-founder Atta Elayyan, he told Neowin that the people who have already downloaded the previous free version of Tweetro will have to pay the full price of Tweetro+ in order to continue to use the app.

Tweetro+, like the previous version of the app, has a number of nice features for the hardcore Twitter user, including multiple account support, the ability to place multiple tweet columns on the main hub and more.

It's likely that when Tweetro+ reaches its own 100,000 limit, Lazyworm Applications will be forced once again by Twitter's rules to remove the client from the Windows Store, so if you really want to try this app out, you most likely have a very limited time frame to do so. Meanwhile, Twitter has already announced plans to launch its own Windows 8 client, but there's no word on when that will be released.