The Windows Phone 'app-gap' may not be completely closed, but Microsoft is doing a pretty decent job of narrowing the gap, with more and more big names making their way onto the platform. The latest such addition is Uber, and it's a pretty significant one, since it's one that is frequently mentioned in discussions of 'missing apps' on Windows Phone.

If you're not familiar with Uber, it's an app that connects passengers with background-checked private drivers, and operates in over 150 cities in 41 countries around the world, including the United States, Colombia, Spain, France, India, Japan, the United Kingdom and many more. 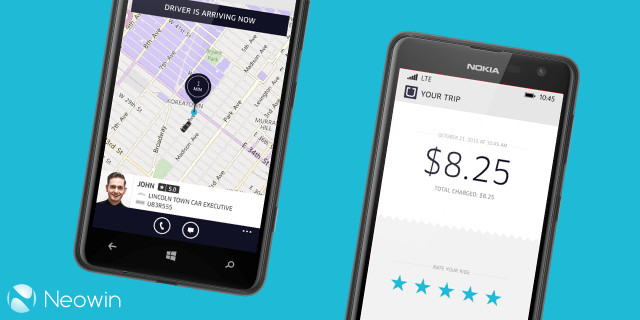 You can request a driver from within the app, and you can even compare rates for different vehicle types. Once you've selected your pickup point, all you need to do is wait for the car to arrive and then enjoy the journey. You can store a credit card on your account, and get a receipt emailed to you once your journey is complete.

The app launches today for Windows Phone 8 and 8.1, and the company promises that more updates are on the way within the next month, including features such as fare quotes within the app, links to share your journey map and estimated arrival time, and the ability to split your fare with your friends.

Uber previously offered an app for Windows Phone last year, but it was removed from the Store just a few weeks after its launch, as users were dissatisfied that it was nothing more than a web wrapper for the company's site.

Download the app from the Windows Phone Store | screenshots via Uber