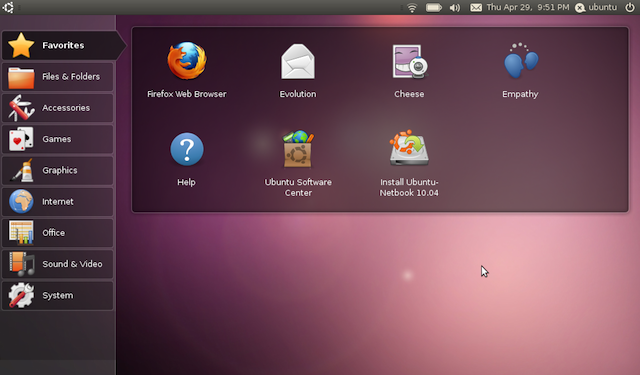 Mark Shuttleworth, founder of the Ubuntu project, this week announced that the next version of Ubuntu will incorporate a global menu bar for all of its applications. The new universal menubar will only be enabled by default on the netbook edition of Ubuntu 10.10 "Maverick Meerkat".

Shuttleworth reasons that netbooks can seek to greatly benefit with a single menu bar as their displays are extremely limited in vertical space. A typical netbook display has a resolution of 1024 x 600. Users limited with just 600 pixels of vertical space are often impeded in efficiently viewing content, especially in web browsing where lots of scrolling is required.

Canonical has decided to only incorporate the new global menu bar for the netbook edition of their OS as there are still usability concerns on larger resolution screens. Netbook users will see the most immediate and greatest benefit with the single menu bar because of their smaller resolution displays. Desktop Ubuntu users wanting a single menu bar will have the choice of that configuration though.

The most prominent operating system that has been using a single menu bar since its revelation in 1984 is Apple’s own Mac OS. While Ubuntu will be taking the same route for its next release, they will actually be going a bit further to integrate both the window title and controls into the menu bar. The proposed UI is to show the window title by default, but when the user moves the cursor towards the menubar (or presses the alt key), the panel will switch to the application’s menu.

"Generally, people use netbooks with a small set of applications running, all maximised. In that case, putting the menu in the panel will save 24 pixels, about 4% of the vertical space. In mockups and prototype testing, the result was a leaner, cleaner feeling netbook interface. Less clutter, less wasted space, and improved clarity of purpose.”