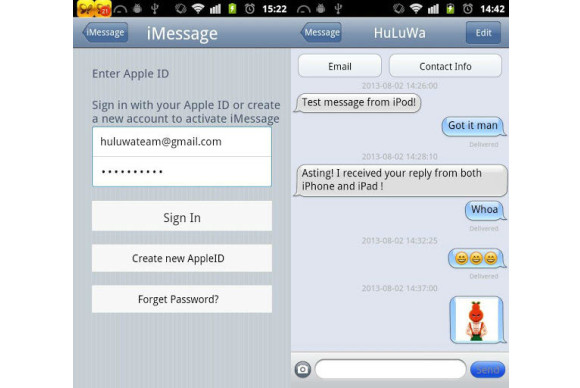 An unauthorized iMessage app has shown up in Google Play that promises to let Android users chat with iOS and Mac users using Apple's iMessage service. Named iMessage Chat, its developers have apparently found out a way to get through Apple's gates. However, you're probably better off avoiding this app.

As you can see from the screenshot above, the app poorly attempts to rip off Apple's iOS 6 and earlier UI design of the Messages app, heavily borrowing from Apple's graphics. Additionally, the app asks for your Apple ID username and password. This information goes to developer servers. Whether or not the developer does anything with that information remains to be seen, but that's probably not a risk worth taking. Steve Troughton-Smith also tweeted the app has code allowing it to sneakily download software in the background to your Android phone.

But hey, according to some reports, the app supposedly does work! It has a few kinks but it can send messages. However, don't be fooled by it's functionality; there's still an overwhelming amount of evidence that points to the use of this app not being in one's best interest.

If you really want to message people, you're better off sticking to regular text messages or downloading a trusted and well-established third-party multi-platform messaging app like WhatsApp or Kik.

Update: The iMessage Chat app has been removed from Google Play.