As hard as it's trying, the US isn't content with censoring and destroying its own web. A new report from Ars Technica takes a look at the efforts of the American government to pressure Spain into adopting controversial internet censorship laws, going so far as to threaten omnious 'retalliation actions' if such laws didn't take effect.

The first whisperings of such efforts appeared way back in 2009, courtesy of WikiLeaks, although they weren't nearly as widely reported as say, Qaddafi's buxom Swedish assassin-nurses. Way back then, a Diplomatic cable from the US embassy in Madrid said that:

We propose to tell the new government that Spain will appear on the Watch List if it does not do three things by October 2008. First, issue a [Government of Spain] announcement stating that Internet piracy is illegal, and that the copyright levy system does not compensate creators for copyrighted material acquired through peer-to-peer file sharing. Second, amend the 2006 “circular” that is widely interpreted in Spain as saying that peer-to-peer file sharing is legal. Third, announce that the GoS [Government of Spain] will adopt measures along the lines of the French and/or UK proposals aimed at curbing Internet piracy by the summer of 2009.

An article from Spanish newspaper El Pais offers up some new revelations, courtesy of a letter from US ambassador Alan Solomont to then-Spanish Prime Minister José Luis Rodríguez Zapatero, in the wake of Zapatero's decision not to approve the censorship laws. Using Bing Translator, we took a look at the original article ourselves. 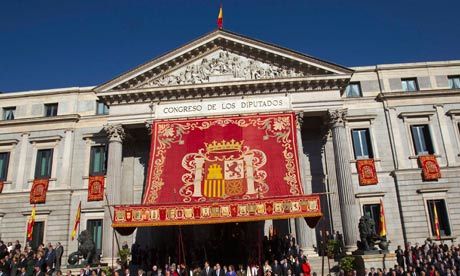 Despite the polite language used, Solomont's letter is filled with not-so-veiled threats and punishment for his 'disobedience,' going so far as threatening to make Spain part of the 'Monitoring Group priority' (which, by the way, it didn't), a list of the 'worst violators of intellectual property rights.' Being part of such a list can carry with it severe trade sanctions.

Acts like SOPA are nothing new in the US, but some might (not) be surprised to find that the US has been trying to strong-arm other nations into adopting similar laws. It's bad enough that any nation tries to censor its own web, but must they really bring down the rest of the world with them? Surely they can take care of that themselves.

Solomont doesn't seem to think so, however. His letter goes on to point out that adopting SOPA-like laws is in Spain's best interest, as “Spain cannot afford to see it's credibility on this issue questioned, [because] rampant internet piracy harms the economy of Spain and its cultural industries.” It has nothing to do, of course, with the fact that the victims of piracy tend to be US based corporations.

Before trying to force other nations into adopting Orwellian censorship policies, the US needs to rethink its own legislation. Censorship is not the answer here. As previous Neowin editorials have suggested, the answer is more likely to lie in the hands of the corporations and content creators, starting with them adopting more modern business models. Right now it looks like we actually are heading for PCMag's chilling vision of the internet becoming a thousand walled gardens.

Disagree? Need to let off some pressure? Head over to the Neowin forums to share your thoughts on SOPA and internet censorship.

Image courtesy of The Guardian