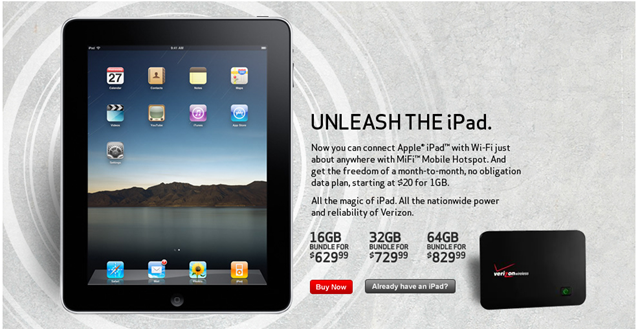 Verizon has officially launched the iPad across America in its retail stores, making this the first Apple device available with another carrier other than AT&T in U.S.

Verizon will offer all three flavours of the Wi-Fi-only iPad, including 16GB, 32GB and 64GB, but will not be offering the 3G-enabled iPad. However, Verizon will be selling the MiFi2200 Mobile Hotspot with its iPad, allowing you to take your iPad almost anywhere in America where Verizon has coverage.

Unfortunately, you'll have to carry around the Verizon MiFi device, but in doing so, you can connect multiple devices including your mobile phones and laptops. MyFi from Verizon supports up to five devices simultaneously.

There is no price difference between either company, but with Verizon you can support up to five WiFi-enabled devices at a time, but you'll have to carry the MiFi2200 device around with you. Prices for the iPad through Verizon are listed as: