What happens if you have an event running during a large-scale football game from the NFL, and you want to bring them both together? You could have the game playing in the background: but why pay for that privilege? It would appear that VEVO had the same idea, as TechCrunch reports.

VEVO is a joint venture between some of the largest record companies in the world, including Sony Music, EMI, and Universal Music. The only big record company not signed in with VEVO is Warner Music. These four companies make up the 'Big Four' of American music services, and Warner have not yet folded in to share their music alongside. Even if you haven't used VEVO for yourself, you are likely familiar with the VEVO channels on YouTube, where you can listen to censored versions of songs you're looking for.

It just so happens that the record labels signed to VEVO are rather infamous for their own counter-piracy measures, and for their 'no-prisoners' attitude to anyone using their music on YouTube, whether it was intentional or not. 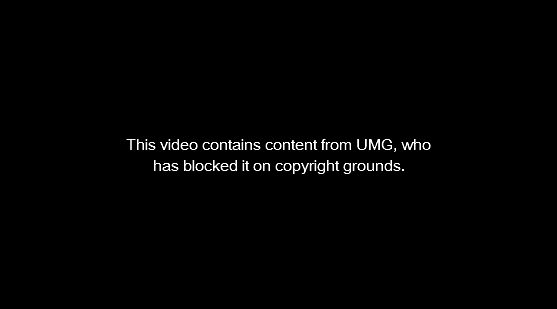 If you've used YouTube for music, you've seen both of these error messages before. 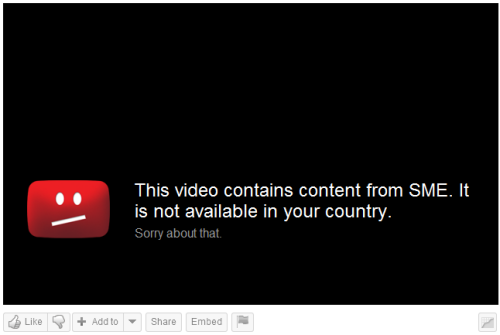 In the background at Sundance, particularly in the VEVO PowerStation booth, the Patriots vs Ravens play-off was running on ESPN America HD. Except it wasn't HD. It was jittery and blurry, and ESPN America is the channel available in the United Kingdom to access ongoing games. Instead of cutting to an advertisement break, the video had to buffer. Then, a mouse cursor flew over the screen, exiting the full-screen window and refreshing the page. Warning lights went off at that moment; the game was quite clearly being pirated in front of an audience.

The next day there were only VEVO music videos playing, which makes a little more sense since they actually own it. You would be forgiven for thinking it was happening on one screen, but that was not the case: it was running on two televisions and several laptops at the event. In short, you have all the issues with the media's approach to piracy. Pirates are lawless thieves, or they are portrayed as being at least. But what if that pirate is wearing a suit and operating as a 'businessman'? You guessed it; VEVO denied any intention of pirating the game.

You may know we had some fun at the Sundance Film Festival in Park City, Utah last month. Our VEVO Powerstation & Sorel Suite was a popular spot for celebrities to get warm, pick up some gifts from our friends at Sorel and Fresh and, most of all, to relax with a drink and play their favorite VEVO videos. We were excited that LMFAO, James Mardsen, Lil Jon, Tommy Lee, Isla Fisher, Josh Kelley and many others all came down to watch some music with us.

But with all the snowy fun we had, there has unfortunately been a report that something other than VEVO music videos was played at the Powerstation. We feel it important to explain exactly what happened so we hope you’ll take a minute to read further.

A guest of our lounge asked for an NFL game to be aired. We said no. There was a laptop hooked up to VEVO.com that fed into the large TV screens around the bar. Unfortunately, the laptop was easily accessible to the public. That was our mistake for not making sure the laptop was more secure. While VEVO staff was in other areas of the venue, the game was put on – via a website transmitting ESPN’s broadcast of the NFL game – without our permission or knowledge.

As soon as we realized the game was airing to the room, we removed it and went back to playing VEVO videos. The game was not aired in its entirety. Rest assured, we rectified this mistake as soon as we became aware what was going on.

Let’s just make this clear. VEVO is not in the business of streaming illegal video content. We work really hard to give our fans access to the best HD music videos and original programming – legally. VEVO takes intellectual property and copyright issues very seriously. We have always supported our artists and content owners and have the same respect for all content creators in every industry and of every art form. So we are very sensitive to what happened at Sundance and the issues it has raised.

So, it wasn't VEVO's fault then. Yet TechCrunch's Jason Kincaid reports that the game was playing for at least half an hour. Surely one of the innocent VEVO employees could have done something about that? Or, perhaps they did. Perhaps they refreshed the page when it needed to buffer? Or did the person responsible for putting it on in the first place happen to stroll back into the room to play with a laptop he probably should have had access to in the first place? News like this could be discarded very easily without evidence. Lucky there is evidence, isn't it?

The whole concept of the PowerStation event was to show off VEVO and its content, but it seems to have done a better job of showing content they shouldn't have access to legally. Kincaid contacted ESPN to see whether VEVO had permission to play the game legally; they didn't. A spokesperson for the sports channel had the following to say, but also confirmed they would not be pursuing legal action.

“We’re disappointed the exhibitor took this route, especially at a festival for an industry whose jobs are most at risk if we are not able to curtail stolen content.”

I'd love to end this with some kind of witty comment, but the situation itself is amusing enough. Thanks to Neowin reader Todd Noyes for bringing the event to our attention as well as letting us know the VEVO CEO was denying the situation.