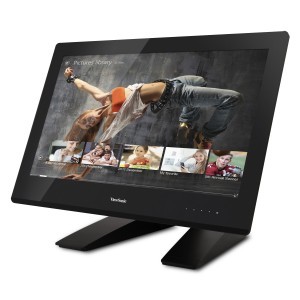 Viewsonic is making use of its CES 2013 appearance to reveal a number of new products, which includes new PC monitors with touchscreen hardware made especially for Windows 8. All of the monitors support up to 1920x1080 resolution and have lots of ports for HDMI, USB, DisplayPort and, yes, VGA devices.

The company also announced the 24 inch TD2420 monitor (no price or release date yet) and the 27 inch TD2740, which will include an integrated 1.3 megapixel web cam for video conferencing. It also has the ability to lay flat via a picture frame stand. It will be out in February for $799.

If you want to go all out for a really big touchscreen PC monitor, Viewsonic will also release the 32 inch TD324 monitor in April. It will even support an optional stand if you want to create a quick interactive display for a store or other retail location. Look for this device in April for a mere $2,499.