According to a new study from comScore, the decline in web based e-mail (webmail) is only accelerating, and the trend isn't going to be reversed any time soon. comScore attributes the shift mainly to the growing use of mobile devices like smartphones and tablets, where it tends to be more convenient to use built in e-mail software, as opposed to websites like Hotmail and Gmail.

According to the study, webmail usage declined by -34% for the 18-24 demographic, and by -31% for people between 12-17. The only group that saw much growth was the 45-54, where webmail growth saw a 15% increase, which shows a marked increase in luddism in that segment – or in all the other segments, depending on how you look at it.

Email clients existed long, long before the likes of Hotmail and others made it possible to access your mail account from any browser. This offered considerable advantages at the time, since it ensured that you were looking at exactly what was in your inbox at that moment, but many of those advantages have disappeared over the years. Since most smartphones are always connected to the network, email clients are just as effective as webmail was in the days of old, even if you're a long way from home. Still, what looks like progress to people who have grown up on Hotmail might seem like a regression through the eyes of more 'experienced' users. 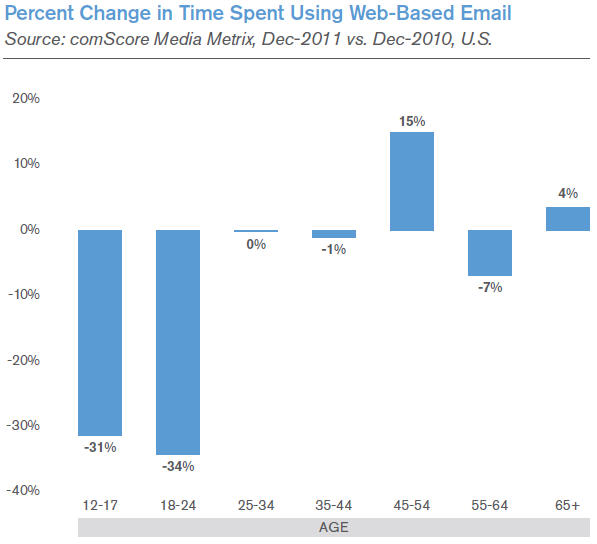 All of this shouldn't be taken to mean that people are sending fewer e-mails – far from it. In fact, the study found that email is actually benefiting from the growth of mobile. Mobile email saw tremendous growth in the last year. What all of this does mean, however, is that the business models of businesses like Gmail and Hotmail are at stake.

Plenty of people are still using their services. The problem is that they aren't accessing them from the web, and they aren't seeing the ads that bring in the money. Having more users sending more email than ever before might sound like a good thing, but it actually becomes a liability for companies when those users rarely, if ever, log into their webmail client and see their ads. Maybe it's time for the return of ads in the text?