At the end of last week, we reported on the first solid information regarding the upgrade path from Windows 7 to Windows 8. At the time, it was revealed by Mary Jo Foley that Microsoft is planning a low-cost upgrade for all Windows 7 systems running the Home Basic edition or higher – but the leaked promotional material that accompanied that information left out the crucial nugget of info: price. 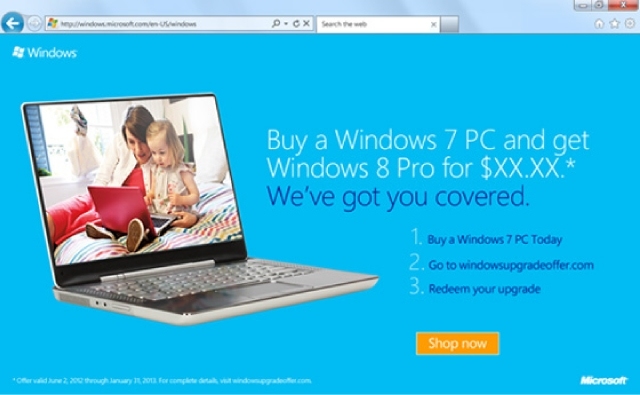 But now that key detail missing from Mary Jo’s leak has been revealed by another prominent Microsoft follower, Paul Thurrott: the cost of upgrading will be just $14.99 USD.

Now, to be clear, this means that anyone purchasing a Windows 7 system after June 2, when Microsoft’s promotional campaign begins, will be eligible for an upgrade from their Win 7 system to Windows 8 Pro at that price. That price tag is also specific to the US; regional pricing variations will likely apply.

This price is solely applicable under the promotional scenario described, and at this stage, there’s no indication as to what Microsoft might charge for owners of Windows 7 systems who PCs were purchased before June 2. Upgrades will also be made available further down the line for Windows 8 system owners to bump up to Windows 8 Pro, which will include features such as Windows Media Center, but we’re still waiting for pricing details on that ‘upgrade pack’ too.