News emerged yesterday that AT&T is planning a major new marketing assault, to widen its promotion of the Nokia Lumia 900. The carrier has already been hard at work in promoting the device, with its in-store sales staff being widely praised for their knowledgeable recommendations of the product, and those efforts seem to be paying off so far, with the company reporting that sales have so far exceed its expectations.

Meanwhile, AT&T’s arch-rival, Verizon Wireless, recently confirmed that it is working directly with Microsoft on Windows Phone 8, which will see the carrier stock multiple devices with the new mobile OS later this year. This is in stark contrast to the support that Verizon has so far given to Windows Phone – the operator continues to offer just a single model, the HTC Trophy, a first-generation Windows Phone that has now been on-sale for almost 18 months.

Casual observers might take this increasing show of affection towards Windows Phone by the operators to be a sign that the OS is finally getting the attention that it’s always deserved. But is there more to it than that? 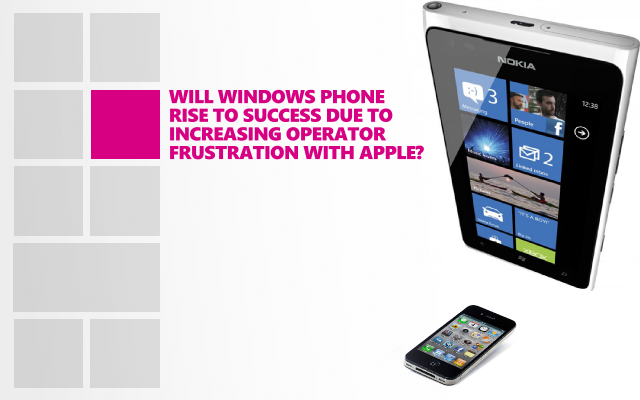 Katie Lewis, associate analyst at Yankee Group, noted recent claims in The New York Times that America’s two largest networks are focusing more on Windows Phone “to both blunt Apple’s influence in the device ecosystem and provide a hedge against what Google may do, now that it has Motorola Mobility under its belt”. But she feels that’s only half of the story.

She says that “mobile operators are sick of taking orders from Apple”, adding that “iPhones are occupying an increasingly dangerous share of mobile operators’ smartphone sales.” Indeed, we recently reported that despite aggressive marketing of next-generation 4G LTE devices, Verizon’s sales of the 3G-only iPhone dramatically exceeded sales of all of the network’s 4G devices combined.

As the reliance of networks on iPhone sales grows, Apple’s influence over them also increases. As WMPoweruser notes, the cost of adding an iPhone subscriber can be up to 40% higher than if that new customer were to sign up with a different device. Apple demands vast handset subsidies from the operators, far higher than for other smartphones. AT&T’s recent quarterly results speak well to this state of affairs – business news outlets widely reported that while the company’s iPhone sales fell by a massive 43% over the previous quarter, its profits increased to $3.58bn; headlines such as “AT&T profit up, helped by iPhone sales drop” were commonplace.

Yankee’s Katie Lewis added that “the success of the third mobile ecosystem would put control over the US smartphone market back into the hands of mobile operators – backing Windows Phone is AT&T and Verizon’s chosen method of self-preservation.”

An analyst’s note from BTIG Research a few weeks ago adds further context to the situation. BTIG’s Walter Piecyk asserted that “as Android’s initial popularity continues to fade because of its uneven and fragmented performance, and BlackBerry falls further into oblivion, there is renewed hope that Microsoft and Nokia will be able to produce a viable alternative to Apple. We expect wireless operators to join in [their] investment, as they increasingly fear Apple’s stranglehold on their margins.”

Given that well over half of Verizon’s smartphone sales – and a staggering 78% of AT&T’s – were iPhones last quarter, there’s evidently a great deal of work to be done. But it bodes well for Windows Phone, as carriers look beyond the short-term spoils of iPhone sign-ups, towards a future where the third ecosystem brings them greater profits and more flexibility than simply becoming ‘dumb pipes’ for Apple.