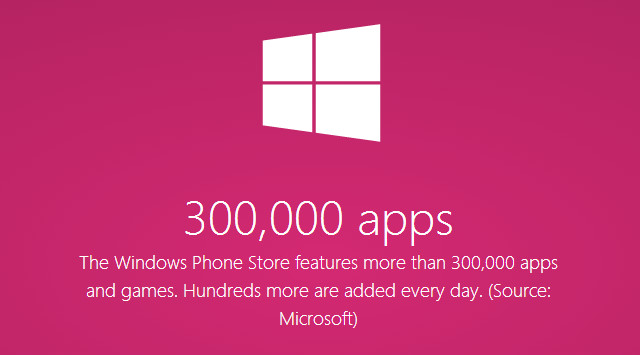 According to Microsoft, the latest number of approved Store apps was calculated till the end of June 2014.

Microsoft told our friends over at TNW “In the past year alone the Windows and Windows Phone app catalog has grown 94%, while the number of active developers has grown by 50%.” it's certainly looking good for the ecosystem, as well as for end users.

Julie Morgan of WaggenerEdstrom on Twitter, also pointed out that Universal apps will also play a huge part in the growth moving forward.

@alex Microsoft by the Numbers has the latest: https://t.co/XAC8uxBTCD. Phone in particular is +300K. I expect universal Windows apps to help

One can only guess as to how many apps the Store will be hosting come January 2015, but if the current trend continues, then we could see another 100,000 added to the catalog by the end of the year.

Good news for Windows Phone users. Do you already feel spoilt for choice? Let us know in the comments.