The controller for the Xbox One may not be radically different from its predecessor, but that hasn't stopped Microsoft from conducting extensive research and testing to ensure that it's the best controller it's ever created. For those who have used the Xbox 360 version, the new controller will certainly feel familiar, with all of the previous buttons, thumbsticks and triggers carried over - although, true to Microsoft's current form, the Start button has been given a makeover.

But the familiar look and feel of the new controller hides the story of its development, and in particular, the extraordinary amounts of stress-testing and research that went into making sure that each individual controller can handle the battering that it will get from its owners. Pocket-lint got an insight into the controller testing labs at Microsoft's headquarters in Redmond, Washington, where they spoke to Bob Brown, the company's accessories and hardware manager. 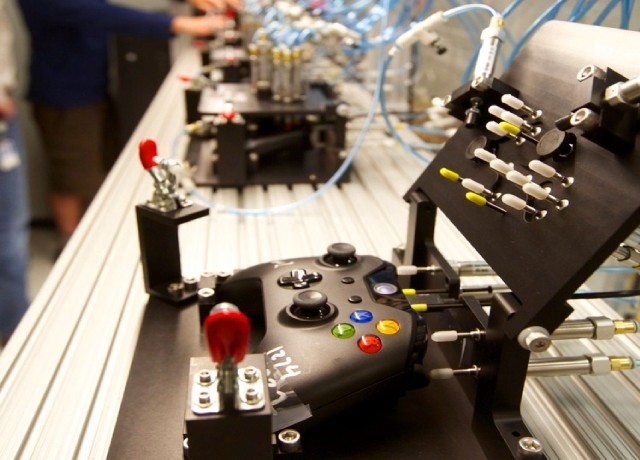 A special custom-built stress-testing rig has been created, in which twenty controllers can be simultaneously put through their paces, with each button being pushed between four and five times every second. By the time a controller has completed its testing run, its buttons will have been pushed around two million times.

The buttons are tested to ensure that they'll survive the frequent, brutal presses of excited gamers over time, but the testing is also designed to make sure that each button performs consistently every time it's used. The controllers are hooked up to computers which allow engineers to monitor their performance, so they can investigate any issues that pop up.

As you'd expect, drop-tests are also carried out and filmed in slow-mo so that technicians can identify any weak points in construction which might result in the controller's functions being impaired - particularly important if you've ever dropped (or thrown) your controller in despair while playing a game. Let's face it, we've all been there.

According to Brown, the testing isn't over yet, with controllers now exceeding three million button pushes, far beyond Microsoft's original targets. With this kind of resilience, each controller is expected to last at least ten years, which Pocket-lint notes is Microsoft's projected lifespan for the Xbox One.