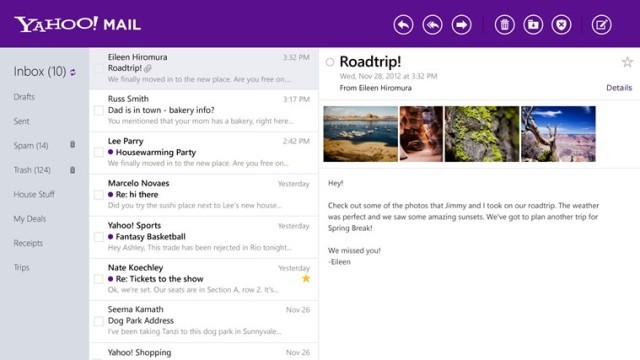 In December, Yahoo launched the first version of its Yahoo Mail app for Windows 8 and Windows RT devices. The launch was part of Yahoo's overall revamp of its online web email service, which still has over 298 million subscribers. This weekend, Yahoo gave the Windows 8 app a major update with a number of new features.

The change notes on the Windows Store website show that the new 1.2 version of the app include a much needed addition. The Yahoo Mail app now allows users to add, edit, rename and delete the folders in their Yahoo Mail account, something which quite frankly should have been put into the Windows 8 app from the start. The new update also adds the ability to search within the app for words in emails.

The new version of the Windows 8 app also adds a way for users to search, select and browse the contact information in their Yahoo Mail address book. In addition, there's quite a few new language that are supported in the 1.2 version; French, Spanish, Italian, Romanian, German, Greek, Traditional Chinese, British English, Vietnamese, Bahasa Indonesian and Swedish. Finally, there's been some unnamed "performance enhancements and bug fixes" put into the 1.2 version.