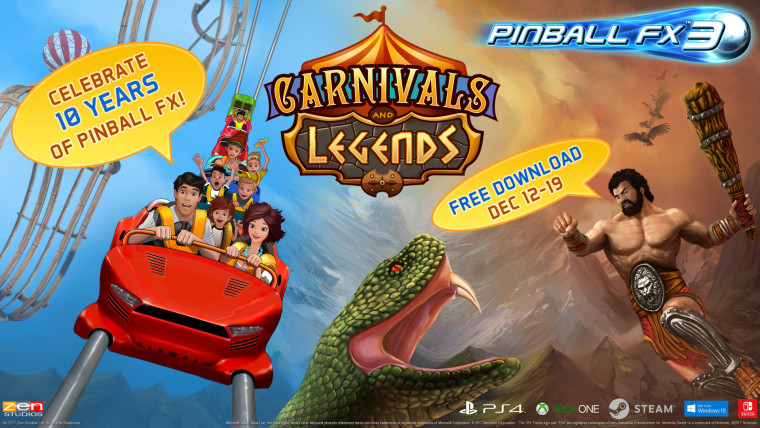 Zen Studios, most famous for its pinball engines, is celebrating the 10th year of Pinball FX this week. We took a look at their latest release, Pinball FX3, a couple of months ago and came away impressed at the improved graphics and added competitive online play. If you've been playing the series for a while, you probably have a lot of tables to choose from, but if you're new to the scene and don't have a lot of money, your choices might be a little lighter. To help with that, Zen Studios just released two new tables and, for this week only, you can download them for free!

The new package of tables is called Carnivals and Legends and promises to take you back to the company's pinball roots as the two tables are original ideas, not licensed against a movie or game. The first table, Adventure Land, tries to recreate classic pinball machines by eschewing some of the video game elements of recent tables. The second table, Son of Zeus, claims to be "the first video pinball table to ever feature dynamic weather events," and you must help Hercules reach the top of Mount Olympus.

While I haven't had a chance to play the new tables yet, I would be surprised if they weren't fun. I've reviewed many of the releases over the years, and very few of them turn out to be bad. That said, even if these two aren't the best ever, you still can't beat the price this week. If you've had a chance to play the Carnivals and Legends pack, let us know what you think about them in the comment section.