Zune Pass, the digital music subscription service that allows you to download unlimited amounts of songs and keep ten to yourself, now has a 12 month version. Previously the only options were a one month and three month pass. One month costs $14.99, and the three month is $44.97, which essentially was just a longer contract with the same price tag. 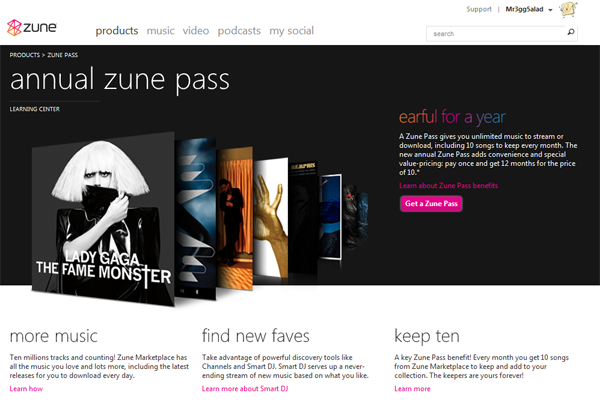 Microsoft has updated the Zune Pass subscription levels to also include a 12 month plan, coming to you at just $149.90. Shockingly enough, this plan actually will save you money, unlike the three month level, breaking down to a cost of just $12.49 per month The Redmond based company says that you get 12 months of Zune Pass for the price of ten, and still allows you to keep ten songs per month.

If someone were to use every free song download, that would make up for $120 out of the $150 price tag, making the Zune Pass a mere $30. Such a bargain even competes with Pandora's price of $36 per year. The price tag also comes down from their previous cost of $179.88, the price one previously had to pay for Zune year-round.

This change comes with the release of Windows Phone 7, making it quite obvious that Microsoft wants to rope in as many newcomers as possible, and to make their music service as attractive as possible. They have even said that if you simply commit to pre-ordering Windows Phone 7 that they will hand you three months of Zune Pass for free.

Zune Pass has come to offer a pretty nice deal, and sporting this smaller price tag, perhaps it will be enough to get more people to join "the social."