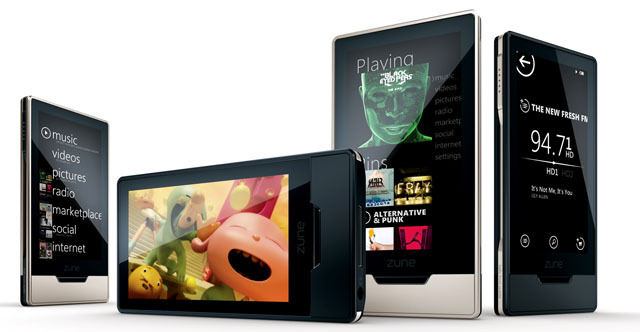 The rumours that circulated throughout last year that Microsoft were planning to launch a Zune branded phone are back, sparked by comments from a Jefferies & Company analyst. Despite strong denials of any plans to create phone hardware by Microsoft's John Starkweather, the launch by Google of their Nexus One device may well pave the way for Microsoft to finally bring their own offering into the field.

Katherine Egbert, from Jefferies & Company, now claims that the Redmond giant will launch a "Zune-like phone" within the next two months, judging by her company's "recent industry checks." She continued, "We expect the new phone to debut soon, at either the Feb 15-18 Mobile World Congress conference in Barcelona Spain, or possibly at CTIA in Las Vegas one month later."

Microsoft is also expected to unveil Windows Mobile 7 at Mobile World Congress (MWC) in Barcelona next month, and there is speculation that any Zune phone device will be running the new version - or that the new version will be running Zune software following comments made by Microsoft CEO Steve Ballmer at the end of last year. Egbert believes that the phone will feature a five megapixel camera, some kind of music store (presumably similar - or the same as - the Zune Marketplace), and support for HD video (also similar to the Zune HD device).

Other than that, there is not much detail in her comments. "We don’t have any information about the cost of the Pink phone, nor do we know what service providers might be partnered with Microsoft," she said, although mentioned that the phone is probably the result of an partnership between Microsoft and an OEM, like the one between Google and HTC that is responsible for the Nexus One. Egbert added that "revenue from the phone is also very unlikely to be meaningful for many years."

All things digital also report that the interface of the device will be "similar" to the current Zune HD. There is also speculation that it may include apps like Facebook, Twitter and Xbox LIVE. Early details about Windows Mobile 7 report that the "Media Edition" of the mobile OS will include HD media playback, Xbox Live integration, Facebook, Twitter and Silverlight as well.

This move would be in direct contrast to comments made recently by Robbie Bach, Microsoft's head of mobile development. Bach expressed his criticism that Google was allowing other companies to use its mobile OS software whilst also selling a direct competitor to those other devices, creating possible fears from the vendors that Google will prioritise its own phone. "Doing both in the way they are trying to do both is actually very, very difficult," Bach said.

Egbert concludes, rather strangely, that "the new phone might explain why Microsoft has allowed WinMo to dwindle to Project Pink from Mary-Jo Foley] would be the 'third screen' (after Windows and Xbox) and final component in Microsoft's '3 screens and a cloud' strategy." Whatever happens at Mobile World Congress next month, Neowin will be there live to keep you updated with all the latest developments.