You don't have to be particularly old to remember a time when kids grew up without computers. But with the explosion of consumer technology over the last two decades, it's now a common sight to see toddlers tapping away at their parents' iPad, or young children furiously slashing away at the screen of a smartphone, engrossed in a game of Fruit Ninja. It's a reality that society has readily embraced, keen to ensure that no child is left behind by the relentless pace of progress and change in our increasingly tech-centric world.

While parental controls and tools, such as Kids' Corner on Windows Phone, have emerged as by-products of this, there remains one question to which many are keen to offer an opinion, but where few can reach a consensus: at what age should children get their first phone? It's a question that OwnFone is keen to answer, with the launch of what it calls "the dumbphone for smart parents". It's pitching its 1stFone to parents as a handset designed for children aged between 4 and 9 years old. 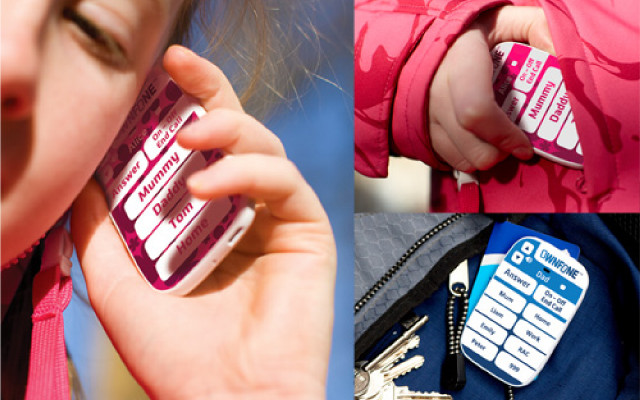 It doesn't have a screen, and you certainly won't find any apps on it, but the 1stFone can call up to 12 pre-assigned contacts, prominently displayed on the handset's colourful frontage. Weighing just 40g, it's the size of a credit card, and its makers believe that its limited functionality will protect children from the hazards of cyber-bullying, 'sexting' or stumbling across inappropriate websites.

The devices are manufactured in the UK by British company CyCell, based on its own reference design called the 'Seed', created by the company's founder, Thomas Sunderland. Parents who order the device can customise it with one of a range of designs, and select the contacts that they'd like the handset to be able to dial. The custom design, featuring the names of the contacts, is then printed on to a Seed device using a 'specialist printing process', while the contacts' details themselves are stored in the cloud. The device is then shipped as a 1stFone handset within a week, and is ready to use out of the box.

Parents can also choose to include 999 (the UK's number for emergency services) as one of the contacts; it must be pressed three times in succession in order for the call to be connected. The handset can also receive incoming calls, and is said to have up to one year of battery life in standby mode.

The company plans to expand its range of customisations to include braille lettering for the blind, and photos in place of text labels. CyCell also says that the handset is ideally suited to more than just young children, with the elderly being another obvious market that could take advantage of its simple, no-nonsense approach to mobile telephony.