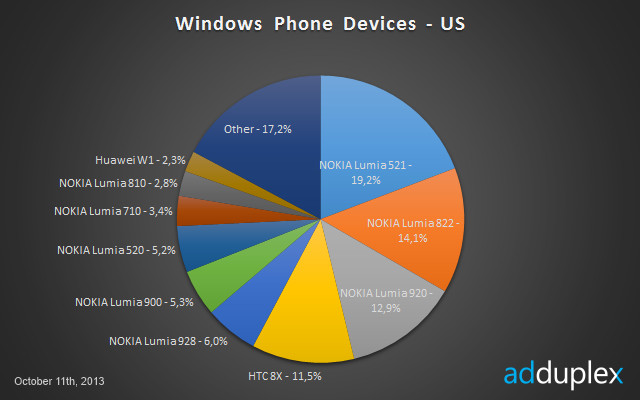 Even though Microsoft and Nokia have both been promoting the Lumia 1020 like crazy for the past couple of months (it even appeared in the special Windows commercial made for The Walking Dead TV show), the Lumia 520, and its U.S. brother the 521, continue to be the most used Windows Phone devices.

The online ad network AdDuplex, which releases monthly reports on the Windows Phone devices that connect to its service, announced this week that the Nokia Lumia 521 is now the number one Windows Phone device with 19.2 percent of the market share. The phone finally surpassed the previous number one device, the Verizon exclusive Lumia 822, in October, as it went down to second with 14.1 percent. The Lumia 520 is in seventh place on the list.

Worldwide, the 520 continues to dominate the other Windows Phones, with AdDuplex showing that it now holds 21.3 percent of the market share. The Lumia 920 is a distance second with 9.3 percent, followed by the 620 with 9.1 percent. The Nokia Lumia 1020 is not even in the top 10 worldwide, with AdDuplex stating it claims 21st place overall and just 14th place among Windows Phone 8 devices. It also doesn't show up in the top 10 among U.S. devices.

AdDuplex also says that, according to their data, the average Windows Phone app now gets twice as many downloads compared to a year ago. That shows solid growth and could help the OS gain more developers, which is something that even Windows Phone leader Joe Belifore says needs to happen.