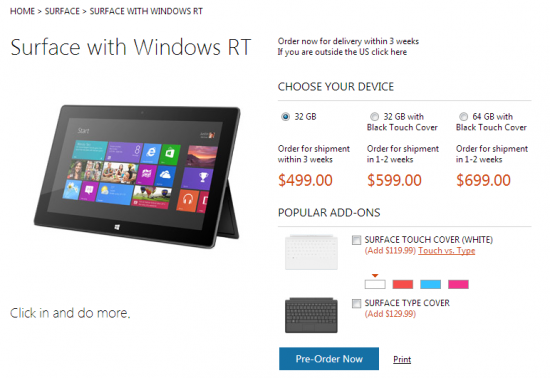 It has been Surface crazy over the past week as Microsoft's Windows RT tablet was finally priced and made available for pre-order. Less than a day afterwards the $499 32 GB version without the Touch Cover was sold out of initial stock and back-ordered for several weeks, while earlier today the same Surface model sold out in Canada and the UK.

Now, every model available from the Surface website has been sold out, with shipping dates for the 32 GB and 64 GB models with Touch Covers pushed back 1-2 weeks, while the 32 GB model without a Cover still sitting at three weeks. We're not entirely sure how much stock was made available to pre-order, but it does at least indicate that people are buying a fair few Surfaces ahead of any reviews.

Your best bet to get a Surface on the launch day is to head directly to a Microsoft Store, although even then it might be wise to reserve one at your local store before the launch - you don't want to turn up and be disappointed come October 26th.