It seemed like a dream of the distant future, but it looks like AMD is finally gearing up to release their highly anticipated AMD Fusion processor line. AnandTech has posted slides from AMD regarding their upcoming laptop APU (Advanced Processing Unit), codenamed Llano. The shift from the conventional CPU title is due to AMD's redefining of the processor landscape.

Fusion is AMD's way of combining a CPU and GPU (Graphical Processing Unit) onto a single die. While it's true that Intel is also readying a CPU/GPU combo, their solution, called Sandy Bridge, will only support DX10 graphics. AMD's Fusion will rock out DX11 capabilities in a 32nm, quad-core, DDR3 capable package. Llano is expected to run at 3GHz and above. GPU details have not been made public.

Llano is set to change the portable landscape. It will save space, power, and hopefully, not sacrifice performance in the process. AMD says that samples of the new processors should be available soon (1H of 2010) with the new platform shipping in systems in 2011. Assuming all goes well, Fusion's final release should fall out around the same time as Intel releases Sandy Bridge. The AMD/ATI merger has begun to bear its first fruit. 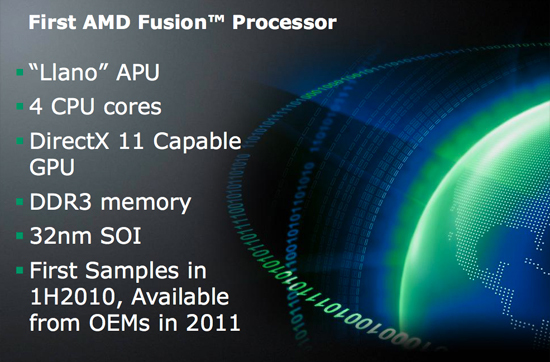