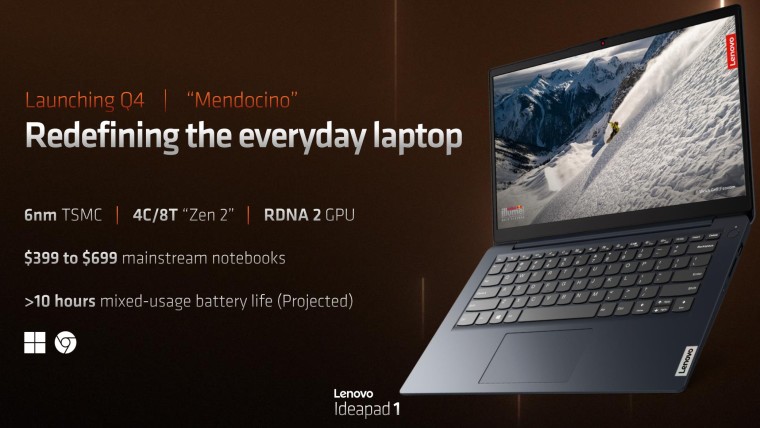 AMD seems to be attacking Intel in two of the most popular categories: gaming desktops and mainstream laptops geared towards professionals and students. The company will be rolling out a new chip codenamed “Mendocino”, which will power laptops and notebooks running Windows and Chrome OS. The Accelerated Processing Unit (APU) will pack the newer RDNA 2 GPU but will have CPU cores based on the slightly older Zen 2 cores.

Portable computers running Windows or Chrome OS are about to get a small but significant boost in processing efficiency. Notebooks in the $399 to $699 range could occasionally double as casual-gaming devices as well. The AMD Mendocino is set to replace quite a few AMD SoCs. More importantly, AMD is trying to offer a lot more value than the Ryzen 5300U chipset.

AMD is essentially offering a slightly newer generation of APUs (CPU and GPU on a single die) than the current chipsets based on the Picasso architecture. The AMD Mendocino will have Zen 2 cores, RDNA 2 GPU, and could max out at 4 Cores with 8 Threads (4C/8T).

AMD’s Mendocino is a small, efficient SoC for laptops that are designed to operate reliably and efficiently while being away from an AC power outlet. This could be the primary reason why the chipset is not packing the latest Zen 3 cores. Still, buyers should benefit from the integrated RDNA2 architecture GPU.

With the new chipset, AMD can provide a solution that is capable of fully accelerating the video encoding and decoding tasks needed mainly for video conferencing software. The new laptop SoC will work with LPDDR5 memory, which can be deployed in dual channel (64-bit) or quad-channel (128-bit) memory bus configurations.

AMD loyalists will quickly realize that the Mendocino chipset is a lot similar to AMD’s Aerith APU (codenamed Van Gogh), which powers the Valve’s Steam Deck handheld console. The only major difference between the two is that Aerith was made on TSMC’s 7nm process, while Mendocino is being built on TSMC's 6nm node.

Laptops with AMD Mendocino should start arriving right around the holiday shopping period. In fact, Lenovo Ideapad 1 could be the first laptop with the new SoC to hit the markets in Q4 2022.