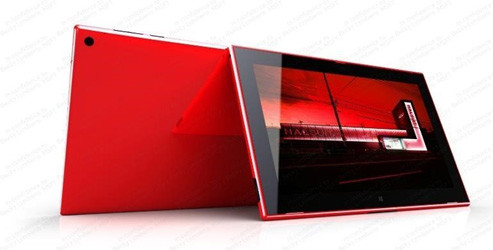 There's been a boatload of unconfirmed rumors about Nokia's plans to launch a Windows RT tablet later this year, including leaked images of an alleged prototype, but now a website has some more information and a newly revealed photo of the device, which reportedly has the code name "Sirius."

Paul Thurrott uploaded the new image of the rumored Nokia tablet today as part of a round up of upcoming Windows 8.1 and Windows RT devices. It states that the price of the tablet will be $499 and will include a quad-core Qualcomm 8974 processor. The article also repeats what has previously been reported on this tablet, including its 10.1-inch display size with 1920x1080 resolution and that it will have a keyboard cover that will offer the tablet some extra battery life.

The same article, which also claims that Microsoft will release a smaller Surface tablet this year, includes some information on two Windows 8.1 tablets from Lenovo that have not been formally announced from the PC maker; the 8-inch Miix 8 and the 10.1-inch Miix 2, the latter of which is also pictured in the article with a case that also doubles as a keyboard.

Nokia could officially reveal its Windows RT tablet in a press event that's rumored to be held Sept. 26.