ShakyTower is a brand new game to the Android Market from developer Mobillness and publisher HyperBees (Speedx 3D, Prism 3D, Pxyidis, etc). It’s a heavily physics reliant game that uses your phone’s accelerometer to control gravity along with touchscreen block placing to build towers of blocks, with varying goals to pass levels.

There are two game modes in ShakyTower: Quick Game and Adventure. Quick Game is exactly what it says; you jump in for a quick tower building burst in increasingly hard difficulty levels and game modes. The only disappointment with this area was that the levels marked Hard, Expert and Insane weren’t particularly difficult – we would like to see ridiculously difficult versions of these made to really test us. 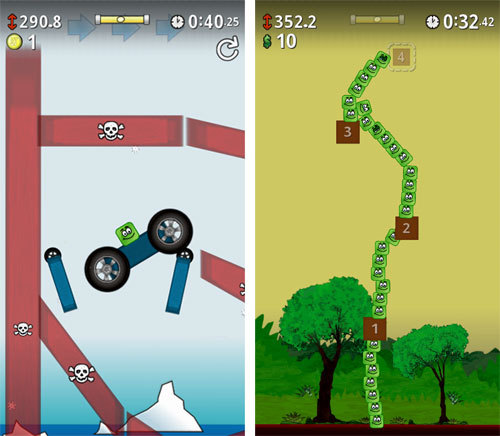 Adventure, though, is where all the fun is happening. You have six worlds to play through in different environments, and each has a fairly sizable set of levels. In each level you must either build towers of blocks, manoeuvre blocks through mazes of death (some fixed tiles cause your blocks to “die”), or some combination of moving blocks and building with blocks.

The cool thing about ShakyTower is that it feels like every level is introducing some sort of new concept despite only using two base concepts. The amount of variation between levels is simply fantastic and we really enjoyed playing through the different objectives in Adventure mode. For example, you can go from moving a single block through a maze of death on a car to having to knock over blocks domino-style to fit one block into a checkpoint – in consecutive levels.

Apart from the varied and large (100+) selection of levels, we have been promised by HyperBees that there will be both more levels and a level editor coming to ShakyTower somewhere down the line. However you’ll most likely be having too much fun actually playing the game to worry about what’s coming later. And did we mention the game is free? Well it is, and that makes it more awesome. 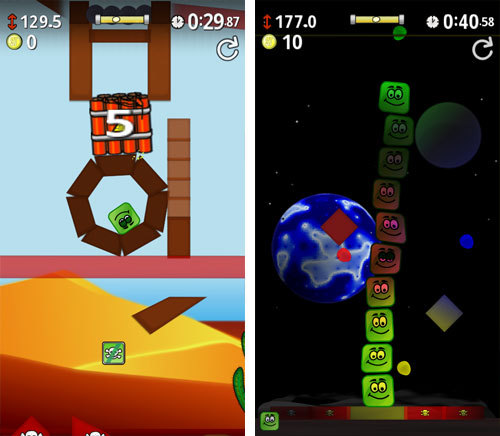 There is a shop in ShakyTower that uses a mixture of coins, obtainable through playing the game, and stars, which are bought using real-world currency via Google In-app Transactions. Our initial reaction was “oh no! we need to pay with real cash,” however after playing the game that’s not entirely the case. Not once during our gaming did we feel like buying anything at all from the shop, and only if you’re really struggling will you need to buy things such as the Next Level Unlock or More Bonuses items from the shop.

The shop is really only there just in case, and you’re not forced to buy anything nor do you need to buy anything to play through all the levels. We really only would recommend purchasing the Ads Removal item, which goes for just 49 stars (a single US$1 in-app purchase), and leaving all the other items for a just-in-case moment.

The graphics in ShakyTower are not amazing, but fit well for the game. You’re not going to be blown away, but when we learned that a lone developer made the entire game we were pleasantly surprised at the overall quality. The music is also not amazing, but it’s there and that’s better than nothing.

It doesn’t matter though; ShakyTower is a really fun game with cool level design, varied objectives and best of all, it’s free to play with no forced in-app purchases to get all the content. We highly recommend that Android users download, try it and enjoy it from the Market.

HyperBees were also nice enough to send us 20 promo codes give you 25 stars to use in the in game shop (plus the 10 you get with the game). If you would like one of the codes, simply comment below and like/retweet this article and we’ll randomly choose 20 of you to receive the codes. Enjoy.

For this review we tested the original (v1.0) release of ShakyTower on a Samsung Galaxy S.