Apple Inc. is celebrating a huge App Store milestone: 500 million downloads, and over 15,000 apps in the store.

The announcement is proudly displayed on the Apple home page, showcasing some of the most popular apps. Apple launched the App Store just six months ago, on July 11, 2008. The store started with 552 applications and a slew of problems. Developers staged boycots and complained about the Non-Disclosure Agreement which held them back from sharing information or code, followed by complaints about alphabetical ordering on the App Store (application names would cleverly start with a space to promote them to the top), and most recently, rejected apps due to either duplicating iPhone/iPod Touch functionality or "limited utility".

Apple has addressed all of these concerns, bringing limitations to a minimum. Ever since, the sheer number of applications has increased exponentially. Developers are making hundreds of thousands of dollars on even the most simple paid applications. Also interesting to note is that the App Store has grown 27x the size of what it was on launch day. That's a lot of apps! 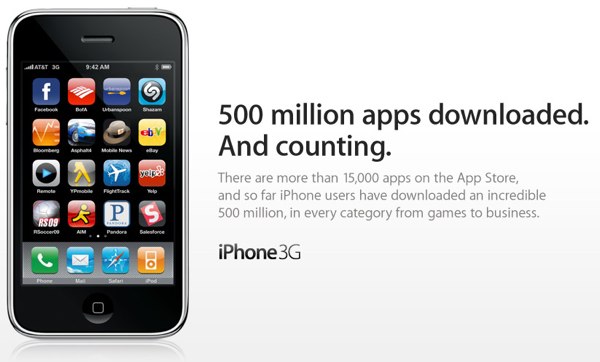