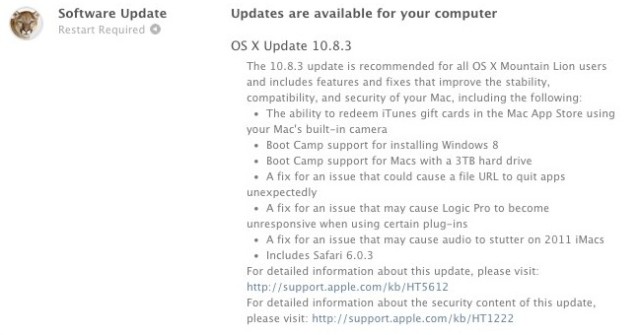 Apple has pushed out an update today for OS X that finally delivers Boot Camp support for Windows 8. The update, available now, is the 10.8.3 update brings a host of other enhancements to the platform as well.

For those of you who have been trying to use Windows 8 with OS X, you will know that the only available options previous to today were not all that elegant. Now that Apple has finally released the update, the ability to switch between OS X and Windows 8 will likely be a welcomed addition for those of you who dual boot.

The update had been in testing for 3.5 months before being delivered to the public which means it should hopefully be free of bugs.

Seeing that is was about this time last year that Apple announced Mountain Lion, there is speculation that Apple could be announcing the next update, 10.9, in the near future.