Over the last year, we have reported on rumors and hints that Apple has been working on some kind of new television-related product. No, not a new version of its AppleTV set top box, but an actual TV set that will have some new and revolutionary features. 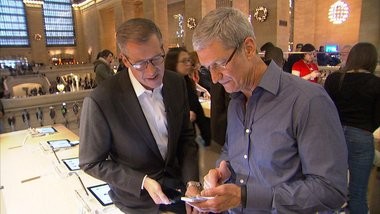 Today, as part of an interview that will be shown in full tonight on NBC's Rock Center with Brian Williams, Apple CEO Tim Cook gave yet another strong hint that the company is working on a television device. He said:

When I go into my living room and turn on the TV, I feel like I have gone backwards in time by 20 to 30 years ... It’s an area of intense interest. I can’t say more than that.

That's perhaps the biggest official announcement that Apple has got some kind of new TV product in the works. Cook also seems to suggest that it will have features that have never really appeared on TVs before.

However, we have already seen a number of so-called "Smart TVs" on the market in the past couple of years that have integrated WiFi and network features, along with web browsers, apps such as Netflix, and even games that are built into the TV. If Apple really wants to make a TV-related product, it has to be better than the current Smart TVs that are now on retail store shelves.