The PadFone X convertible smartphone and tablet hybrid device from Asus will finally start retailing in the US from next month. Pre-orders will be taken from the 6th of June - nearly five months since AT&T first announced they would be selling the device at CES in January.

The device is comprised of a 5-inch Full HD, standalone smartphone that can be inserted into a specially-designed supplied docking station. This effectively turns the handset into a 9-inch tablet computer. The phone has a Qualcomm Snapdragon 800 quad-core processor running at 2.3GHz paired with 2GB of RAM, Android 4.4 KitKat and a 13-megapixel camera. 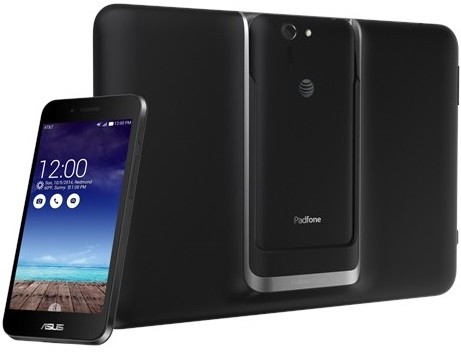 It is certainly a convenient, albeit unusual, concept for many though. AT&T will only charge you one data plan for what are effectively two separate devices as the pair only requires one SIM card. This is because all connectivity is done through the phone - the docking station that makes the device into a tablet is effectively just an external display for the handset.

When you have to leave your home, simply eject your phone from your tablet and continue where you left off. An added bonus is that the phone's already large 2300mAh battery is extended to a huge 4900mAh when in tablet form as the dock contains another large auxiliary power unit.

Whether the device will be a success or not in the US remains to be seen. Although, the tablet isn't exactly slim because of the docking mount, which could put off some potential buyers.

Source: Asus and AT&T via The Verge | Image via Asus