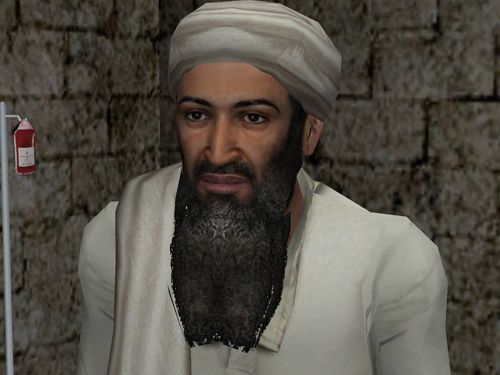 Osama Bin Laden's death at the hands of US forces on Sunday will be the subject of a new and free episode of a long running first person shooter series. According to Kotaku, developer Kuma Games plans to release the 107th episode of its Kuma\War shooter series on Saturday. That episode will be titled The Death of Osama Bin Laden and is supposed to depict the death of the leader of the al-Qaeda terrorist organization via an assault on a compound in Abbottabad, Pakistan in an operation by US Navy SEALs on Sunday.

This upcoming episode will not be the first time that Kuma Games will depict Bin Laden in one of their games. Previous episodes of Kuma\War have depicted a failed attempt to capture Bin Laden in 1998 under the supervision of the Central Intelligence Agency. A later episode depicted the 2001 operation of Tora Bora in Afghanistan where for two weeks Afghan forces tried to capture the terrorist leader with air support provided by the US and British forces. Once again Bin Laden managed to slip away.

The Kuma\War series, which uses Valve's Source engine as its graphical basis, ran for 106 episodes and depicted a number of various historical military battles and events including Operation Red Dawn, when Iraq's leader Saddam Hussein was captured in his famed "spider hole" by US forces in 2003. While there hasn't been a new entry in the Kuma\War series in some time, the Kotaku article quotes Kuma Games CEO Keith Halper as saying that they will be making a special case with this new chapter. He is quoted as saying, " ... it was a matter of personal decision between myself and the development and writing staff to say we can't close the door on Kuma War 2 until we've told this absolutely critical last story."