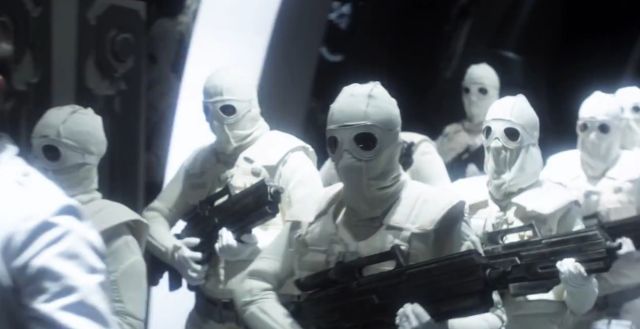 Fans of the Red Faction sci-fi shooter game series not only have a new game, Red Faction Armageddon, to look forward to in a few weeks, but there is also a TV movie coming that's based on the THQ game franchise. Today the first trailer for the movie, Red Faction Origins, showed up on YouTube giving us our first look at the latest attempt to adapt a game series as a film.

This movie, however, is decidedly of the low budget variety. It will be shown first on the Syfy Channel on Saturday, June 4 in the time period that's usually the home for B-movie guilty pleasures such as Dinocroc vs Supergator and Sharktopus. The movie itself is supposed to be a story bridge between the last game in the series, Red Faction Guerrilla, and the new Red Faction Armageddon which will be released a few days later for the PC, Xbox 360 and PS3 on June 7.

The movie does have a number of actors that may be familiar to fans of sci-fi TV shows and movies. The biggest name is Robert Patrick, best known as the T-1000 morphing killing machine in Terminator 2: Judgement Day. Patrick plays Alec Mason who was the main playable character in Red Faction Guerrilla. The movie also stars Brian J. Smith, fresh off the recently canceled Syfy TV series Stargate Universe, as Alec Mason's son Jake Mason. Other actors in the movie include Kate Vernon, revealed as a Cylon in the final season of Syfy's revival of Battlestar Galactica, and Gareth David-Lloyd, one of the members of the cast of the BBC's sci-fi cult hit Torchwood.