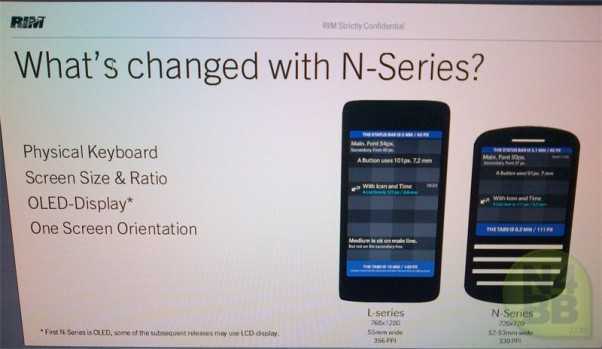 Research in Motion really needs a big hit with the Blackberry 10 operating system and its new smartphones. It's share of the smartphone market has been cut down by the success of iOS and Android devices. While RIM released a prototype of the first Blackberry 10 device to developers in May, fan site N4BB.com reportedly has received leaked documents showing some of the first details of the two upcoming Blackberry 10 smartphones.

The touch screen based Blackberry 10 device is reportedly being called the L-series, according to the document; the report claims it will be released as early as September. The documents show that the L-series will have a 768×1280 resolution screen and it will also reportedly be 55mm wide and have 356 PPI (pixels per inch)

RIM will also release a Blackberry 10 device with its well-known QWERTY-style physical keyboard. The document shows that this device is being referred to as the N-series and will have a 720×720 screen resolution. It will be between 52mm and 53mm wide and have 330 PPI. The N-series is not expected to be released until sometime in the first quarter of 2013.

RIM is already rumored to thinking about a spin-off or even selling its handset business and the company is scheduled to reveal its latest quarterly financial results on Thursday.