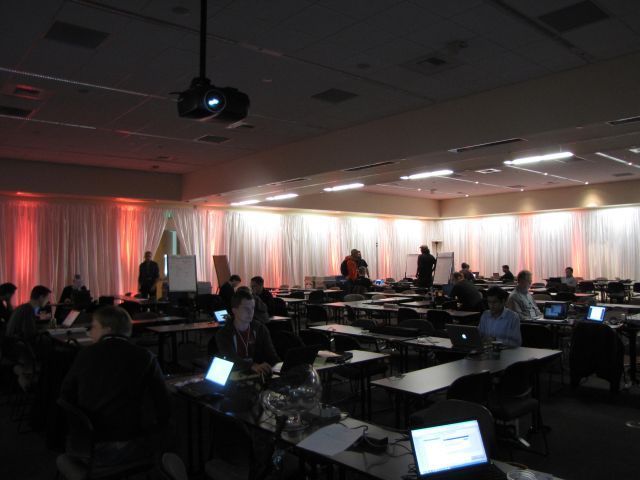 While many people attending BUILD 2012 in Redmond, Washington this week filled their time by attending panels, keynote speeches and, yes, parties, some people decided to focus their energies on making software for three of Microsoft's operating systems or services.

Of course, we are talking about the 2012 BUILD Hackathon, where small teams of coders started work and then completed their apps for Windows 8, Windows Phone 8 and Windows Azure during the conference.

Today, the judges checked out the finished apps in the hackathon and announced the winners. The team with the top winning app in each category got $2,500 for their efforts.

In the Windows Azure category, there was an app called QBranch that won the top prize. No, it had nothing to do with James Bond's gadget creator. Rather, it was an app that allowed people with mobile devices to check in at a location, such as the DMV, and then the digital "queue" registers you ahead of time. The upshot of QBranch is that you can wait in line at a place like the DMV without having to physically be there all of the time until your number comes up.

In the Windows 8 category, the winning team came up with an app called Crowd Sourced Memories. Basically, if a person is at an event, such as a wedding, they can use a Windows 8 device to upload images and messages to one central location so that everyone can check out an album of content. There's also a Windows Phone 8 component, which lets people who have the app upload pictures of an event and have that appear on the crowded sourced album.

The Windows Phone 8 division was won by a team that we talked to on Tuesday. You may remember they wanted to make a Hollywood Squares game that involved Facebook profiles and images. In the end, the team won with their idea, now called Social Squares. The game lets users arrange nine of their Facebook friends in a 3x3 grid and then the player is asked random questions about each person to gain points. One cool feature is that it uses the accelerometer in a Windows Phone 8 device to let people shake the phone to randomly generate new friends in a grid. Social Squares also uses the NFC features in a smartphone so that when two phones touch, you can quickly compare Social Square games with another player. We can definitely see this game catching on.

The judges were clearly impressed with many of the apps submitted for the BUILD 2012 hackathon. Indeed, some of the judges seem to want to hire a few of the developers on the spot for their creations. Keep in mind that all of these apps were made in the space of three day or less.