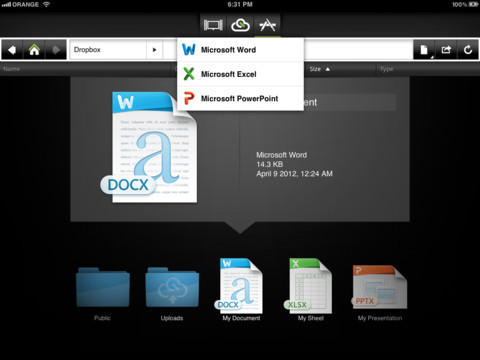 The iPad is clearly a popular device for consumers but for serious business and content creators it has been a hassle to use. OnLive recently launched a way for iPad users to access Microsoft Office apps. However, it is not alone in this marketplace. CloudOn also offers a way to use the iPad for Office users.

Today CloudOn launched the 2.0 version of its free app for iPad owners (the first version launched in January). Unlike OnLive, which tries to mirror the Windows Desktop, CloudOn has its own interface that gives users more direct access to edit, save and share Word, Excel, and PowerPoint documents.

New features in this 2.0 version include being able to share files via email, additional support for storing files in a person's Box cloud storage account (it previously just had Dropbox support) and support for reading PDF files. There's also a new image viewer for people to view pictures in various formats.

With both CloudOn and OnLive now offering Microsoft Office access for the iPad, the big question is, "When will Microsoft release its own native version of Office for the iPad and other Apple iOS devices?". In February, it appeared that there was a leak that showed such an app running on an iPad but Microsoft claimed the image was in fact faked.