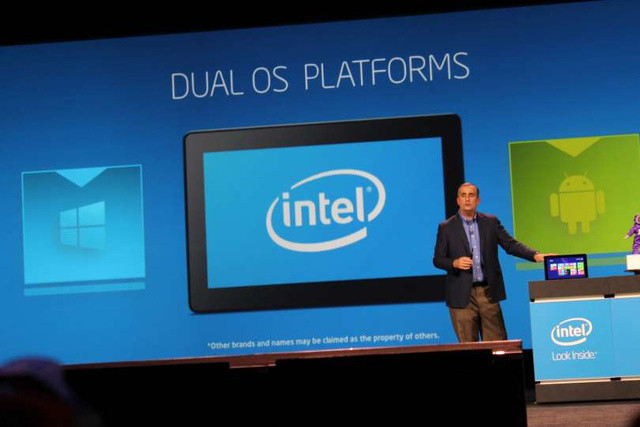 Intel has confirmed support for running a dual operating system setup of Windows and Android on their processors at the Consumer Electronics Show 2014 in Las Vegas.

Just before CES, rumors had started coming in about multiple computers and tablets which featured the Windows and Android Dual OS combo reportedly known as "PC Plus" devices. ASUS launched its first Dual OS convertible, the Transformer Book Duet during their conference at CES just an hour before Intel took to the stage. The notebook-tablet hybrid runs Windows 8.1 or Android 4.2.2 in either mode and is powered by Intel processors up to Core i7. Samsung announced the Ativ Q last year which also was a Intel-based hybrid running the two operating systems, however, it is assumed to be using a different technology to carry out the functionality.

During Intel's own press conference, the company's CEO showcased the ease of use of running Windows and Android simultaneously. Intel has tried to make the transition seamless and one which requires just the push of a button. Built-in device protection is expected to prevent security breach while switching between the OSes or using the setup.

Although Windows has more productivity value than Android, casual apps and games remains to be its Achilles' Heel. With the Dual OS feature, manufacturers can expect to sell more portable devices to consumers who want to have the entertainment value brought by Android on the move.