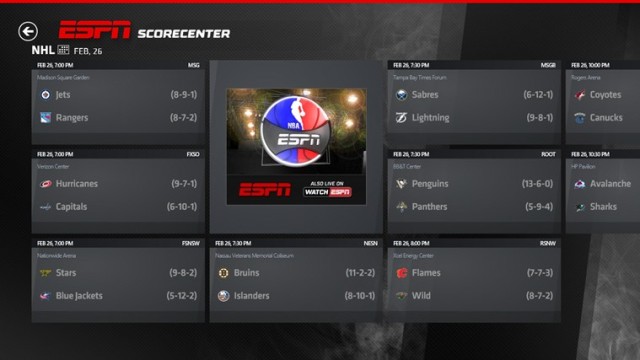 In November, ESPN launched its official Windows 8 app, offering sports fanatics a way to get lots of information about their various passions. While Microsoft has its own dedicated Sports app, made by the Bing team, ESPN is certainly a more recognizable name in sports news coverage.

This week, the ESPN Windows 8 app got a new update and adds some new features, including one that may be unwanted by many users. One of the good new features is ScoreCenter, which is designed to give sports fans easier access to the games and matches that have already happened, along with any future games that are due to take place.

The app also adds the Semantic Zoom feature in Windows 8 for all of the sections in the ESPN app, letting users pinch and zoom in and out of the various parts of the app. The team club house section has some navigational improvements and the app has also improved the login feature along with some general performance and navigation improvements.

The bad news? The ESPN app now also includes those banner ads that many other Windows 8 apps have when you scroll through stories and sections. While they are not as annoying as some banner ads on certain websites, we do hope that ESPN could also put in some kind of option that would remove the ads from the app pages.