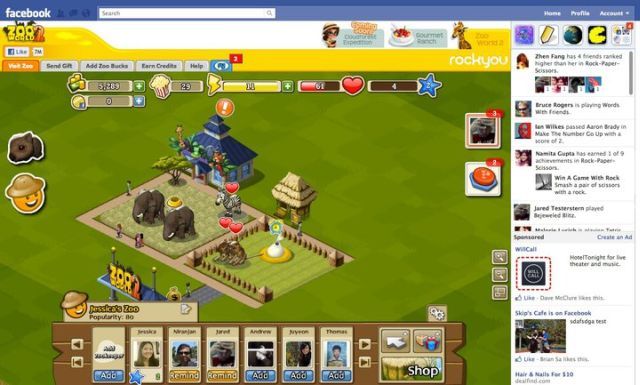 Part of Facebook's massive growth is tied to its huge user base playing games. Facebook has now launched some major improvements and changes for its game players. In a post on the Facebook blog site, the company revealed its new game news ticker. It shows how your Facebook friends are doing in their games including achievements, scores and more. If you want to join one of your friends in a game you can simply click on one of those game news ticker items and start playing. You can also customize your ticker to show your friends whether or not you are playing a game.

Another new feature will add full screen support for a number of popular Facebook games including Zynga's CityVille "in the coming days". Finally, Facebook has added a feature that allows its users to bookmark their favorite games on top of a users homepage.

Facebook's new game features come at the same time as Google's announcement of games support for its Google+ service. While the games on Google+ may not have the massive amount of users as Facebook's games have, Venture Beat reports that games on Google+ do have one big advantage. Google will only be charging game developers and publishers a 5 percent fee for each in-game microtransaction. That compares to a whopping 30 percent for Facebook in-game transactions. That kind of a deal could see more social networking based games make the move to Google+, no matter what kind of new features Facebook adds for its gamers.