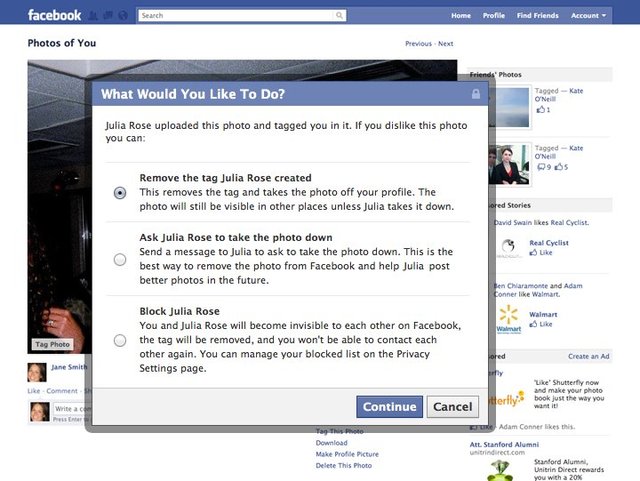 Facebook have long been known for their controversial site updates. While some are welcome changes, others have been less than well received. A lot of criticism has been directed towards Facebook's privacy handling, and a new range of features focusing on these privacy concerns should hopefully alleviate some of the worries users may be having.

In a lengthy blog post, Facebook have outlined each new change alongside a reasoning as to why the change was made. For the most part, the changes concern themselves with how tags are handled. Users can now choose to approve photos and posts they've been tagged in before the post appears on their profile. This cuts both ways though, so a user who uploads a photo can choose to approve tags before they are made.

Research suggested that a lot of users didn't entirely understand the untagging feature. In the screenshot above, a new dialogue box is shown that makes it clearer what untagging actually does. One of the options asks if the user wants to send Julia a message telling her that they want her to take off the photo. Whether or not Facebook sends out a pre-written message is unclear.

On the other side of things, the rules on who can be tagged have been relaxed. Now, tagging is a free-for-all, and members don't have to be friends to tag each other in posts. The reasoning here is that it becomes awkward when you have a photo album with pictures of people you don't know. Non-friends can now be tagged from the start, without needing to add each other first.

Post privacy settings have also been refined. As you type a post, any friends tagged in it will be reflected in the privacy controls. Say for example your settings allow friends of friends to see posts where you've tagged a friend. If you write a post with Amy tagged in it, but your privacy setting for the post is Friends only, Facebook will change it to show that Amy's friends will be able to see what you're writing. It sounds confusing at first, but Facebook hopes that this will make clearer who can see what.

Finally, the Places feature is being phased out. Instead, members posting from any device can add their location to any post. If you're posting a status update or a photo, you can click the little location button to add your location into it. In a similar fashion to Google+, location and post will now be merged with each other.