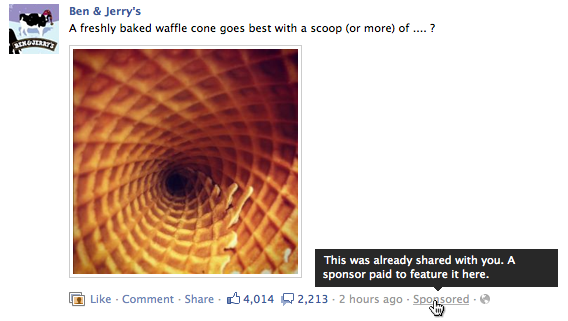 If you are an avid Facebook user, get ready to be hit once a day with an ad on your main news feed. TechCrunch reports via unnamed sources that Facebook will begin adding what it is calling "Sponsored Stories" in the news feed starting in January 2012. This move is the latest one by the social networking service to give advertisers a bigger piece of the huge Facebook pie.

The article claims that just one of the "Sponsored Stories" will appear on a Facebook user's main news feed a day, and that the ads will be labeled as "Sponsored" in the news feed such as in the above screenshot. The ads will also only relate to a user's friends or Pages that they already like. However, there will be no way to opt out of seeing these "Sponsored Stories" in the web site's news feed.

At the moment, the mobile versions of Facebook won't be getting these news feed ads although the article does say that Facebook is considering the idea.

Facebook launched a version of "Sponsored Stories" earlier this year but the ads were confined to user's activities such as checking into a location, liking a Page and so on. This new approach is much more visible and it's going to be interesting to see how users react to seeing an ad as part of their Facebook news updates.