Hoverboards, which ironically do not hover, but only run on two wheels to transport people, have been infamously known to randomly combust and catch fire, which puts its owners in serious danger, much like the Galaxy Note7 fiasco. This then led Amazon, which formerly sold the travel boards, to temporarily pull hoverboards from its store. 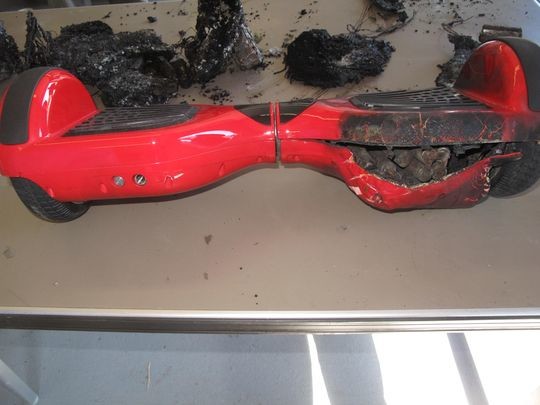 However, it seems that one family was still victimized by the fancy transport gear. The Fox family, hailing from Nashville, Tennessee in the United States, purchased a hoverboard from Amazon back in January; the battery of the hoverboard (seen in the picture on the right) subsequently overheated and exploded, causing a fire which eventually burned down the family's entire house. Although no one died in the incident, the experience together with losing the things they own caused pain to the family, emotionally, physically, and financially.

Steve Anderson of the Nashville law firm Anderson & Reynolds PLC, who represents the Foxes in the incident, emphasized how devastating the issue was for the family. He said:

"It's also important to consider that literally in a matter of few minutes every single personal possession of this entire family was destroyed. The only things that remained were their vehicles and handful of books and pictures they were able to find that had water damage they were able to dry out. In the blink of an eye it was all gone."

The fire department's investigation found out that the fire was caused by a battery problem within the "FITURBO F1" hoverboard that the family owned. The incident is similar to many others who owned the transporter, finding out that the battery was faulty, which then led to explosions.

The Fox family reportedly bought the hoverboard from Amazon. However, after months of investigation, the seller could not be located, which led to the conclusion that the entity who sold the device was not legitimate.

According to Tennessee product liability law, if the manufacturer cannot be located, the organization who sold the product will be held responsible. According to Anderson, Amazon was the one who sold and shipped the product in the Foxes' incident.

With this in consideration, the Fox family is now demanding from Amazon $30 million as compensation for the incident. Furthermore, the lawsuit states that the family should be compensated for the emotional distress and physical injuries that the it got.

The complaint contends that Amazon knowingly sold a dangerous product. "The Foxes contend that Amazon and its various subsidiaries had information about the danger of this product well in advance of the January 9 fire, and on top of that, they had notice, they should have known the product was being misrepresented on their website," according to Anderson.

All things said, should you own a hoverboard, it is best not to use the device at all, as it may pose a lot of dangers which could harm our lives, as well as other people, in the long run.