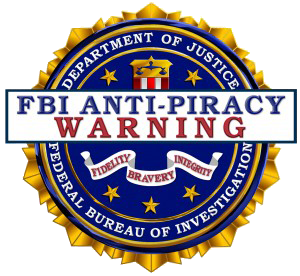 The FBI's anti-piracy warning, one of the most annoying and totally useless anti-piracy campaigns ever imagined, is about to get a whole lot more common. The FBI is revamping its rules governing the use of the logo by making it available for any copyright holder to slap on to their product, whether it's a book, a CD, or a photo.

As you might expect, the FBI's regulations are a bit of a bore to read, but the gist of it is that it's fair game to slap the logo on anything you please. Heck, since the FBI doesn't have the resources to police who actually uses the logo, you don't even need to verify that you actually own whatever you're putting the logo on. That means that you can look forward to lots of Chinese bootlegs emblazoned with anti-piracy logos.

The regulations also spend a lot of time repeating the 'fact' that the logo isn't a waste of resources, and that it is actually really effective:

...the FBI believes that the APW Seal and accompanying warnings convey important messages to the public and are a significant component of its efforts to deter and to investigate federal crimes involving the piracy of intellectual property.

Because everyone knows, if anything is going to make criminals (and that guy who's trying to burn a CD for granny) start behaving, it's a silly little logo stamped on everything you own. Bravo!