Five months ago, Apple released iOS 10, the newest major version of its mobile operating system. The OS was made available for many of the company's existing devices, as well as its latest iPhone 7 and 7 Plus. 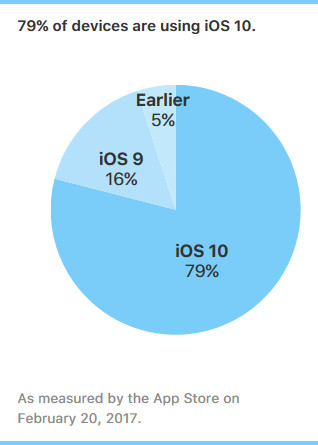 It took just six weeks for iOS 10 to reach 60% of Apple's iOS devices, and by early January, that figure had reached 76%. Now, according to the latest data from the Apple Developer site, iOS 10 is in use on 79% of active iOS devices.

While its rate of growth has, unsurprisingly, slowed compared with the first weeks after its release, iOS 10 is still being adopted at a faster rate than its predecessor. As Apple Insider noted, five months after its launch, iOS 9 had reached 77%.

16% of active iOS devices are still running version 9, with 5% continuing to use earlier versions.

Since iOS 10's launch, Apple has continued to roll out interim updates, adding new features and improving the overall performance of the OS. This week, it released the third Public Beta of iOS 10.3, which adds the ability to use Find My iPhone to find your wireless AirPods, and improvements to HomeKit and CarPlay, among other minor new features.