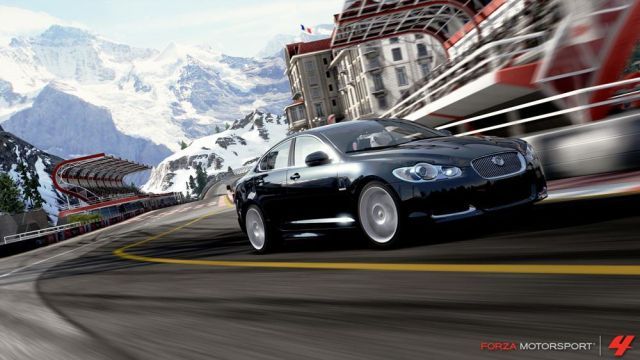 Microsoft's Forza Motorsport racing sim series is one of the longest running and most popular of its Xbox 360 exclusive game titles. Next week, Forza Motorsport 4 is released to stores but before that happens Xbox 360 owners who pay for the Xbox Live Gold online service can now download a playable demo for the game. The 1.27 GB demo allows gamers a way to check out one course, the Bernese Alps, in a Quick Race. You will be able to pick from a small number of the full game's complement of cars including the 1970 Mercury Cougar Eliminator, the Kia cee’d, the 2011 Subaru WRX STI and the 2011 Ferrari 599 GTO.

You may be wondering why the Kia cee'd is in the line-up with all of these super sports cars. It's actually quite simple. The Kia is the car model that's used in the BBC series Top Gear for all those celebrities like Tom Cruise, Cameron Diaz, and Jeff Goldblum who drive around the Top Gear track in the Reasonably Priced Car segment of the TV show.

The full version of Forza Motorsport 4, developed by Microsoft's in-house game developer Turn 10 Interactive, will feature an updated graphics engine compared to the last game in the series along with tons of cars from over 80 different companies. If you own the Kinect motion controller camera you can actually drive the cars with Kinect enabled and you can even turn on a feature that changes the game's viewpoint when you turn your head. There's also the new Autovista mode which allows gamers to walk all around cars in a kind of virtual showroom. Even Halo's Warthog jeep is in this mode (sadly you can't actually drive it). Forza Motorsport 4 is due for release on October 11.