On September 3, Nintendo announced its celebrations of the 35th anniversary of the launch of Super Mario Bros. on the Nintendo Entertainment System. The Mario franchise is arguably one of, if not the most recognizable name in the industry, so naturally, Nintendo likes to flaunt it.

As part of the celebrations, we got Super Mario All-Stars added to the Nintendo Switch Online's library of SNES games; Super Mario 3D All-Stars released as a collection of the three first 3D Mario games; Super Mario Bros. 35, a battle royale-style adaptation of the original game; and Mario Kart Live: Home Circuit, a real-life Mario Kart game that lets users create their own courses at home and play on them alone or with friends who also have the game.

The most recent launch as part of the anniversary is the Game & Watch: Super Mario Bros., and this one celebrates more than the 35th anniversary of Mario. It also celebrates Nintendo's first success in gaming, the Game & Watch. Each of these products stands on its own as a piece of Nintendo history, and you can see that with how the packaging is designed to showcase Super Mario Bros. at first, but also the original Game & Watch: Ball game once you slide the box out of the plastic wrap. 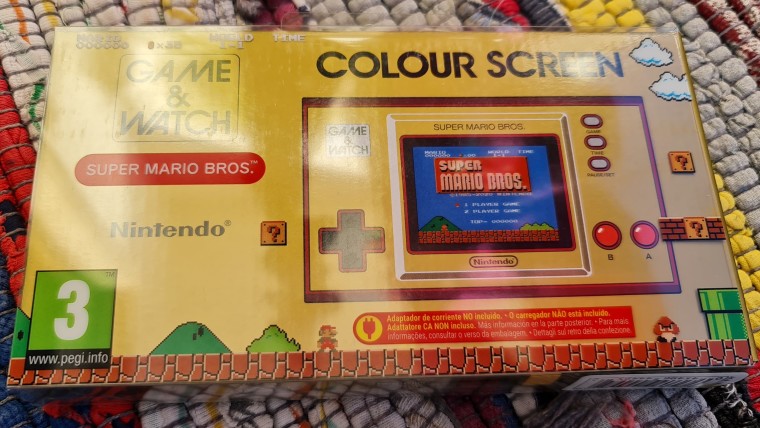 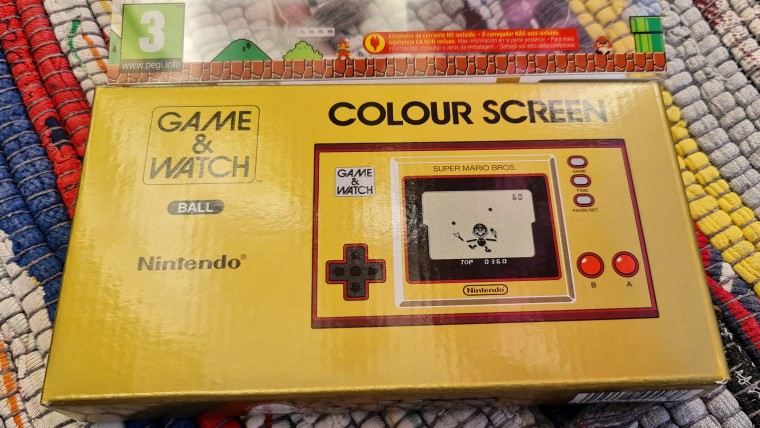 It may not hold as much of a place in many people's memories, but the Game & Watch was how Nintendo started seeing success in the gaming industry, all the way back in 1980 - meaning this is the device's 40th anniversary, too. The original Game & Watch devices were designed with calculator-type screens, and they were simple endurance games, having the player perform certain actions for as long as possible before messing up their streak. The content on the screen couldn't change beyond what fits in a single frame, so this was the only kind of game that could be crafted, and it also meant that each Game & Watch device had a single game, with many iterations being released over the years.

The device was conceptualized and designed by Gunpei Yokoi, who was riding a train when he noticed a man fiddling with a calculator to kill some time on the ride. The name Game & Watch is about as self-explanatory as it gets. It was a game, but when you paused it, it constantly displayed the time, so it could be used as a pocket watch. You couldn't turn the console off entirely, so the watch was always there, and an alarm was also added in later models. 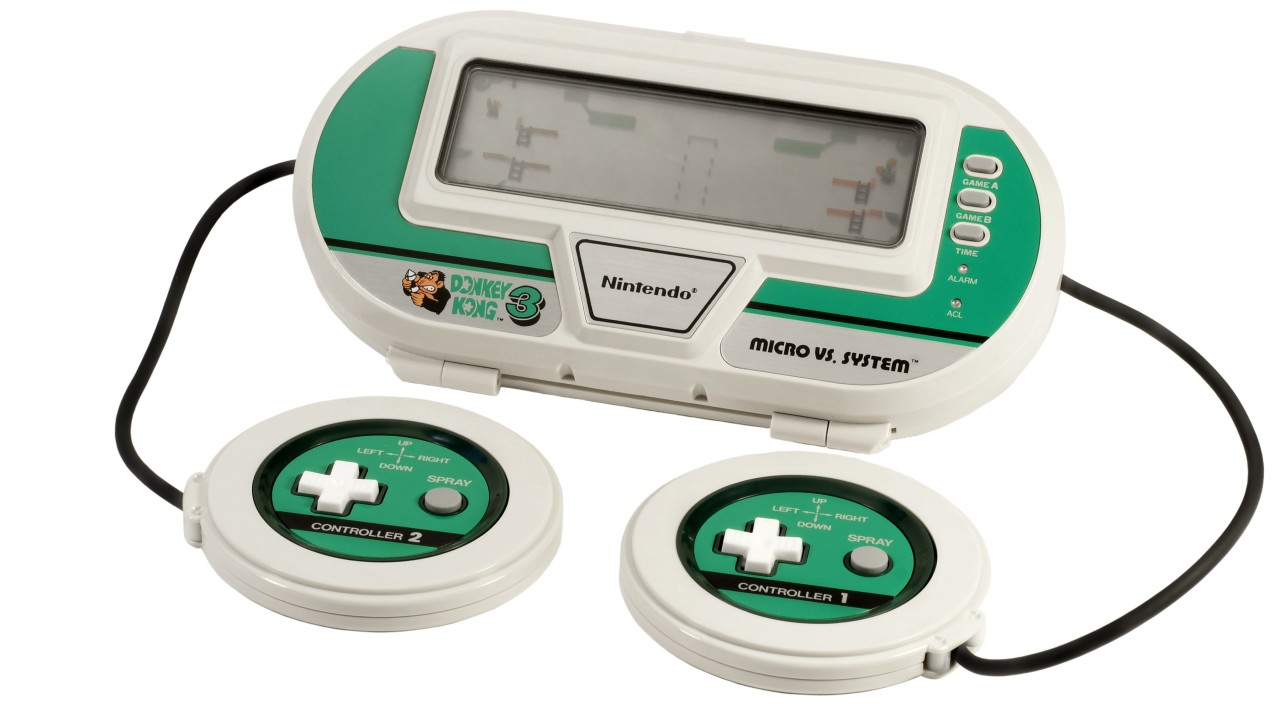 All in all, the Game & Watch products sold 43.4 million units worldwide, and they became Nintendo's first big success in the gaming industry. Sadly, I don't personally own one, or I didn't until the Super Mario Bros. edition.

A lot of the identity of the original Game & Watch lineup lives on in this new Super Mario Bros. version. The look seems to mostly derive from the Gold and Wide Screen series of the Game & Watch, but it can also be interpreted as a reference to the Famicom controller, which was itself red and gold. The gold-colored plate on the front is metal, which makes the device feel much more premium. 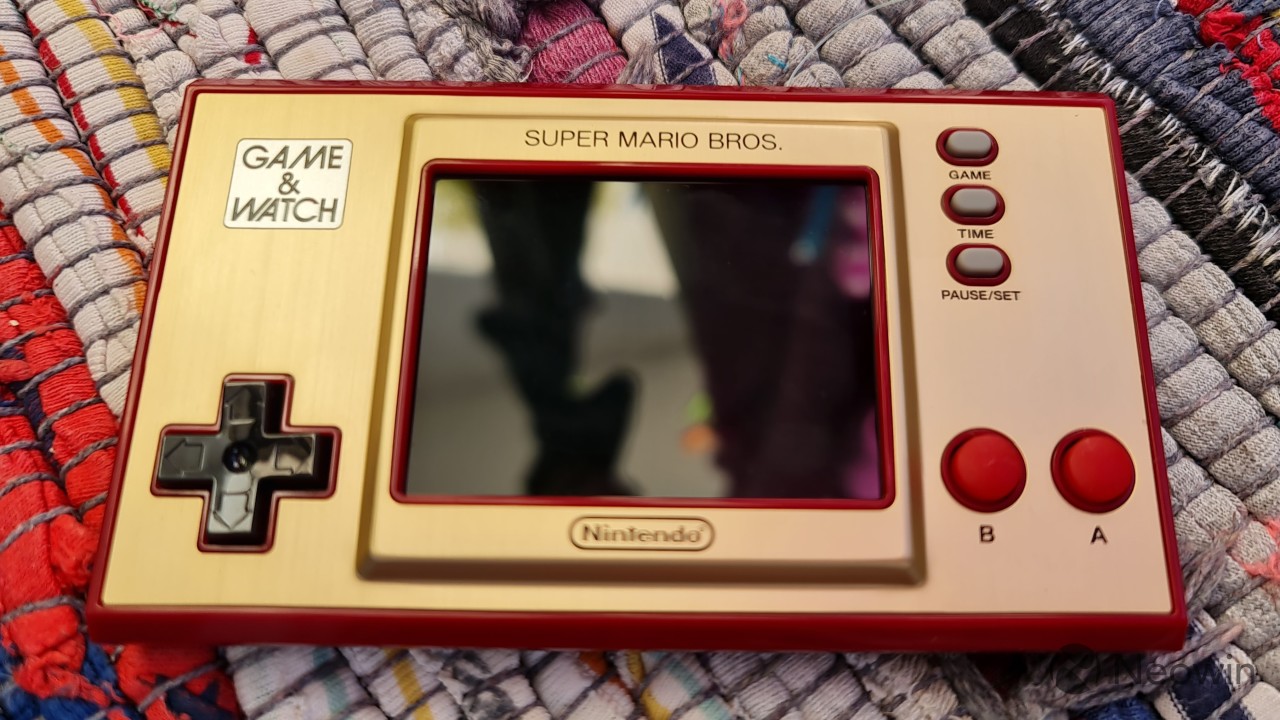 Having never owned a Game & Watch before, I was surprised at how compact this thing is. It's quite small, and also very thin, which I think adds to the premium feel. It also makes it super easy to carry around if you just want something to help you kill some time throughout the day. However, it can be a bit uncomfortable to play for longer periods, especially if you have big hands. 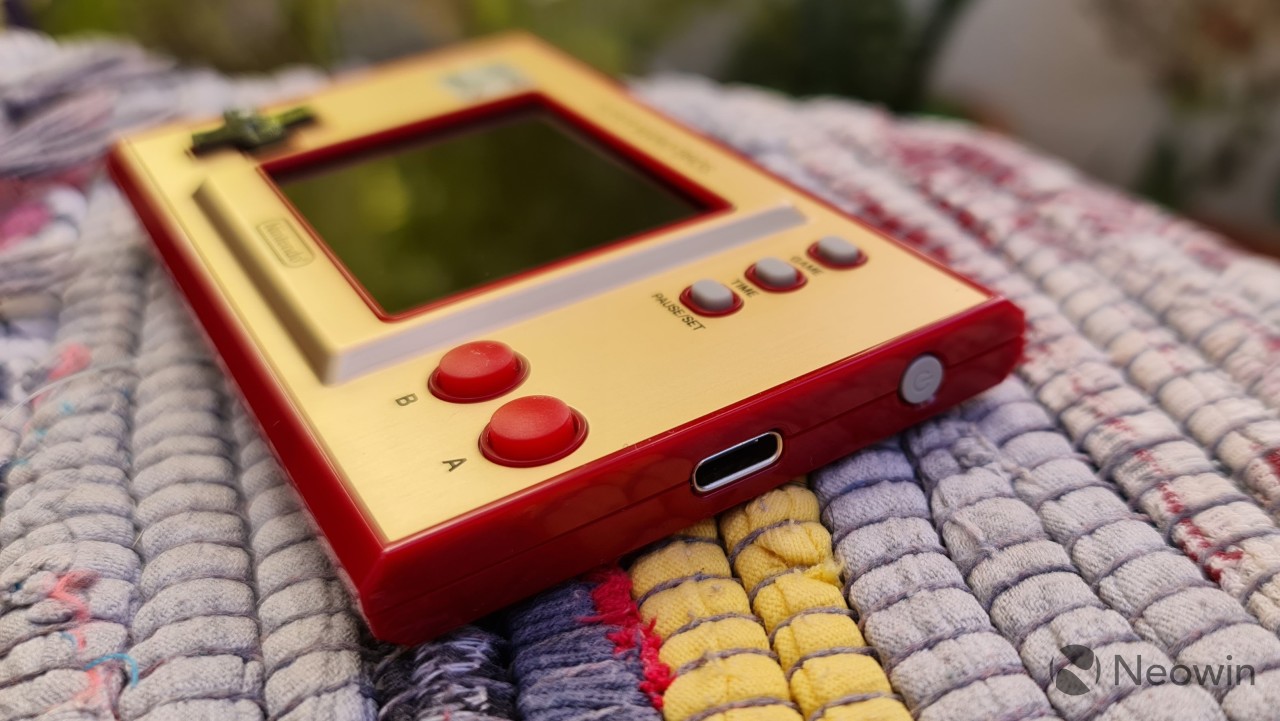 There are, however, some things here that weren't in the original Game & Watch devices. For one thing, there's a power button, so you can actually turn the device off, or put it in sleep mode, at least. The battery is also rechargeable here, and it charges via USB Type-C. It's great to see that Nintendo didn't cheap out and use micro-USB or something. It's a retro device but modern enough to not be annoying. A USB Type-A to Type-C cable is included, but you need to provide a power adapter yourself. In terms of omissions, the original Game & Watch devices had a kickstand, which you don't get here.

Of course, another big change from the classic Game & Watch models is the display. This version plays a couple of games from the NES, so a color backlit display is used instead of the calculator-style LCDs of the past. I was shocked at how good the display really is. It gets very bright and as far as displaying NES games goes, it looks phenomenal. The pixels are also so small here that it helps these games feel less dated than they actually are, and they feel right at home on this tiny device. 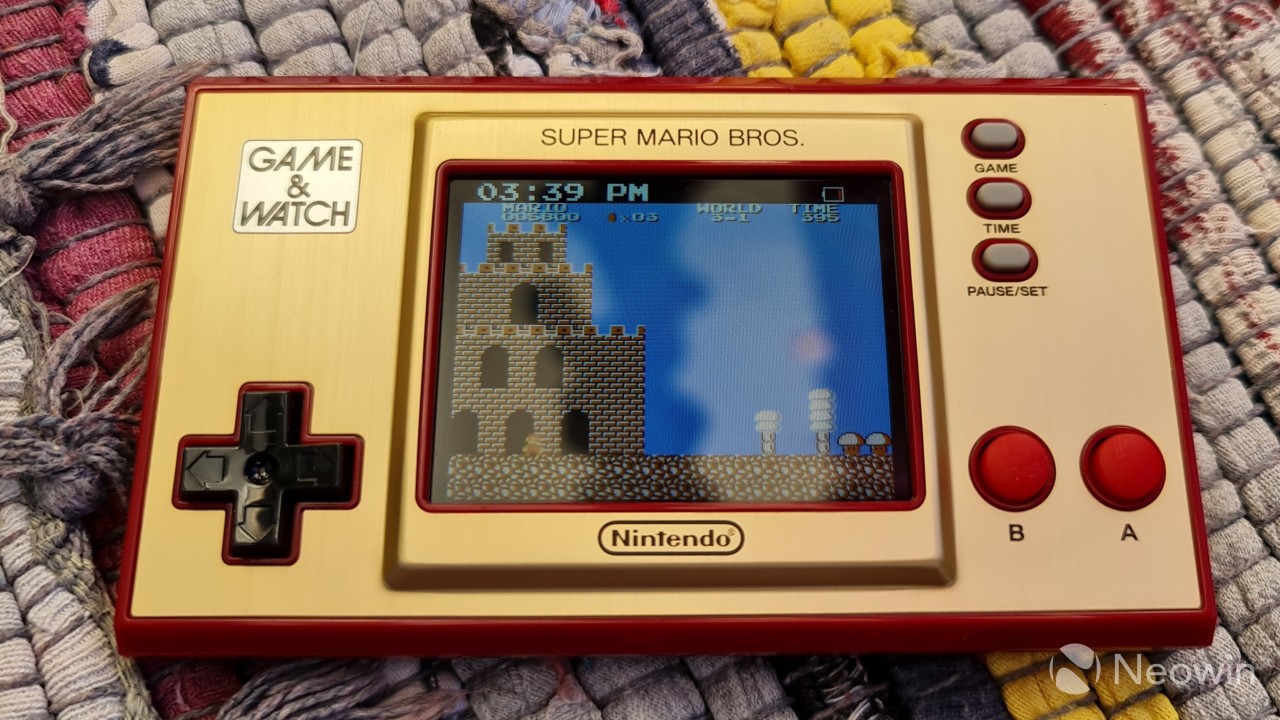 Sound is also as fine as it needs to be for NES games. The single tiny speaker on the left side gets surprisingly loud, and the quality is more than good enough for the sounds you'll hear from these games. 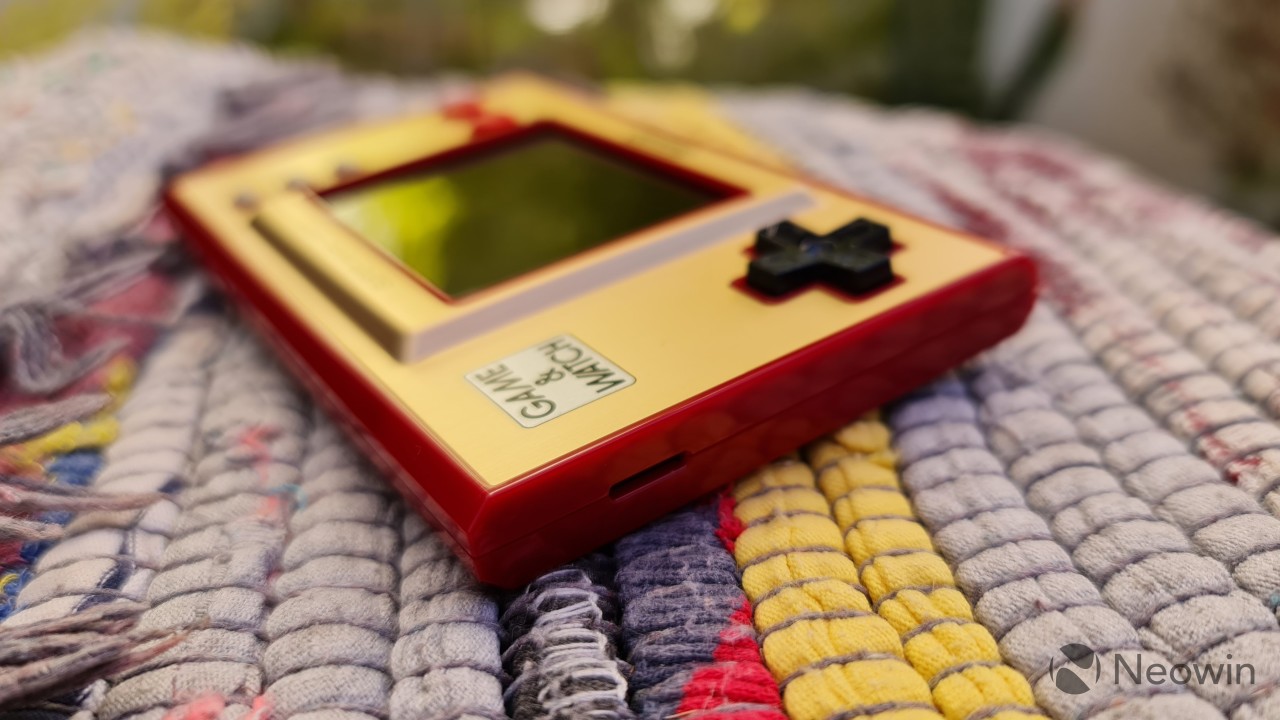 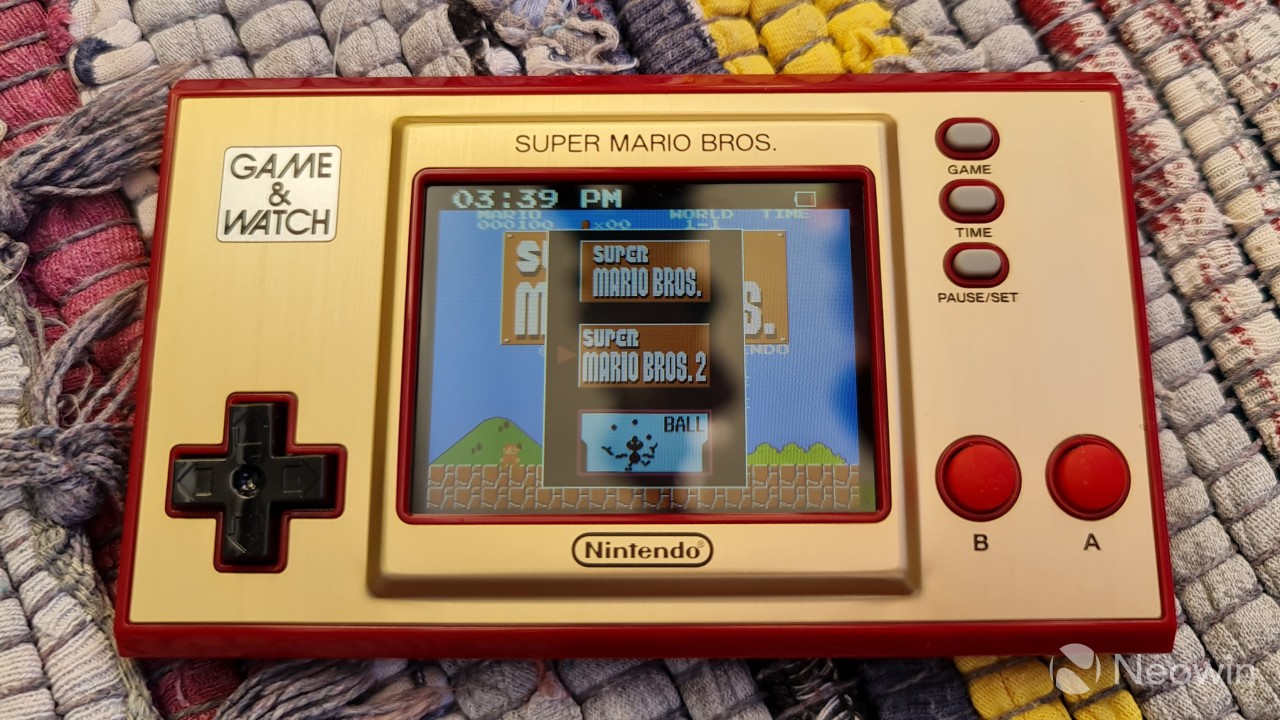 The games are recreated nearly perfectly on this device, including the copious amounts of sprite flickering you'd get in NES games and some bugs from the original versions. There are, however, some bonuses and changes here and there. For example, you can press the B button on the title screen for both Super Mario Bros. games to start from a specific world, as long as you've made your way to that world before. You can also hold A when starting a game to start with infinite lives. Additionally, after beating the original Super Mario Bros., you unlock Hard mode on the title screen, whereas the original game only allowed you to play it if you kept the system on after beating the base game. For Ball, in addition to playing as Mario, you can also play as Luigi by holding the A button on the title screen for five seconds. Sadly, there's no option to play as Mr. Game & Watch.

All the games control really well here, with no input delays, and the controls somehow feel tighter than I remember them being for these games. I've never had a situation where I blamed the controls for a death or something like that. 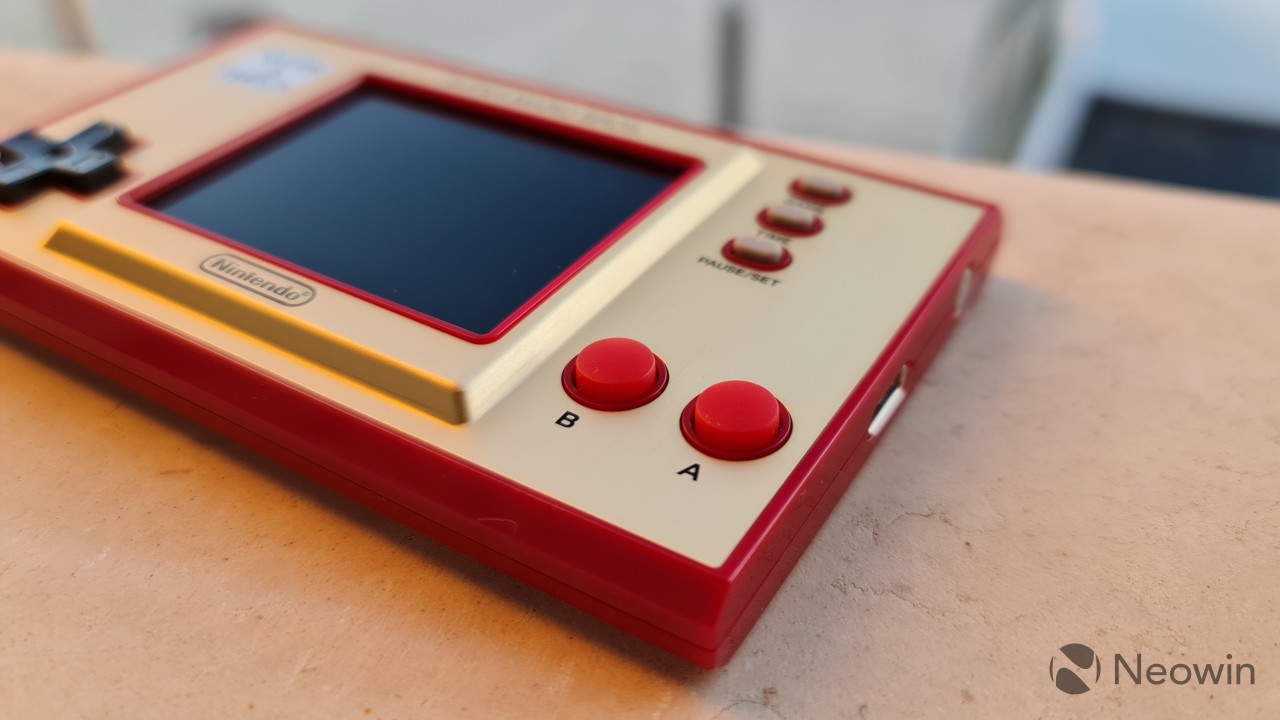 The buttons themselves feel good too. The D-pad is made of hard plastic, and it has a nice tactility to it without feeling too harsh when it actuates. The A and B buttons are made of a rubber-like material, and that may sound terrible, but it actually works well. While the buttons are very soft, they still have nice actuation, and again, I've never been able to blame the controls for losing in a game. They end up feeling comfortable, and the rubber gives them more grip than hard plastic would.

Of course, it wouldn't be a Game & Watch without a watch, and Nintendo also designed one themed around Mario. The clock screen features an animated screen with Mario running through the bottom, and various characters from Mario games appearing from time to time. The time of day on the screen changes throughout the day, and there are 35 easter eggs that happen at different times of the day, such as the blocks that display the time changing to coins at 5:55 (AM and PM). You can also just see a simple clock by pausing any of the games. 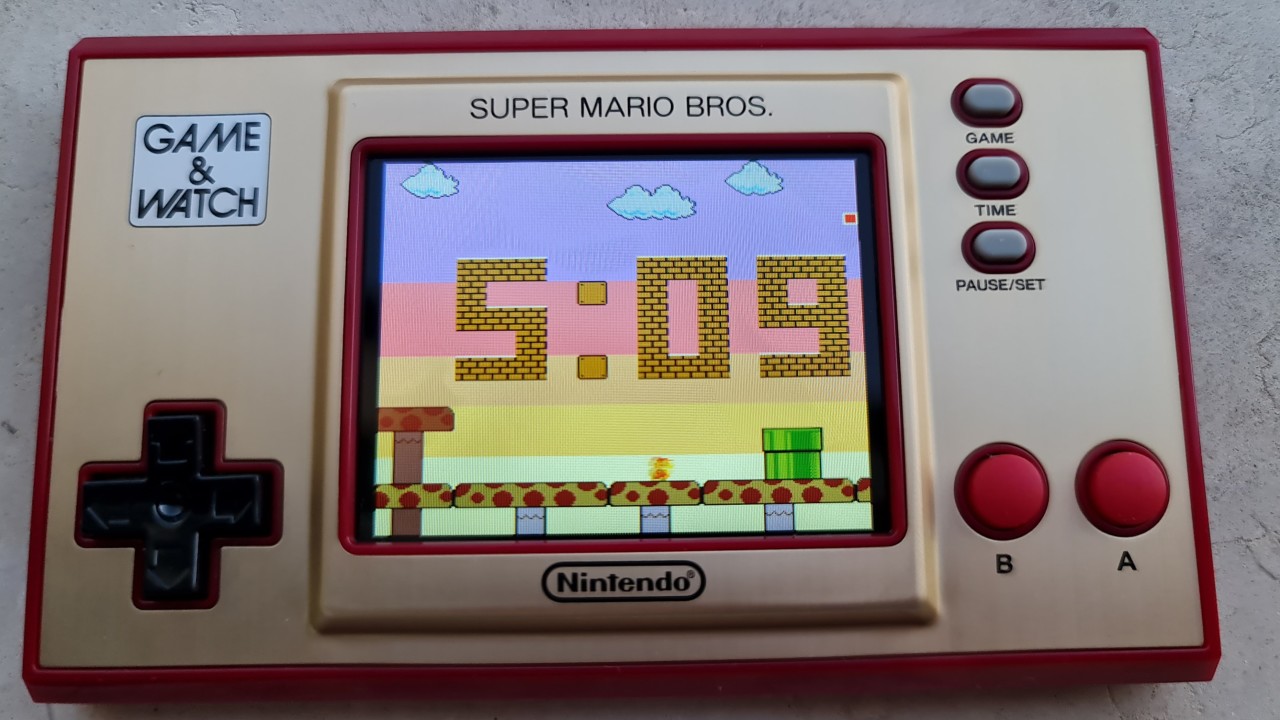 From the watch screen, you can press the A button for five seconds to listen to the Mario Drawing Song, which was originally available in 2010 as a promotion for a Mario-themed contest in the Nintendo DSi application Flipnote Studio. The song is only available in English, but you can choose subtitles for different languages. Nintendo issued a warning prior to the release, though, as many non-English languages are mixed up and selecting one language will display the lyrics in another.

This issue can't be fixed, and that's because there's no way to update or change the software on this system. The USB Type-C port has no data throughput, meaning there's no way to push anything onto it. That also means that, if you were hoping to turn this device into some sort of tiny emulation machine, you won't be able to, at least not without physically opening up the device and some very advanced tinkering. 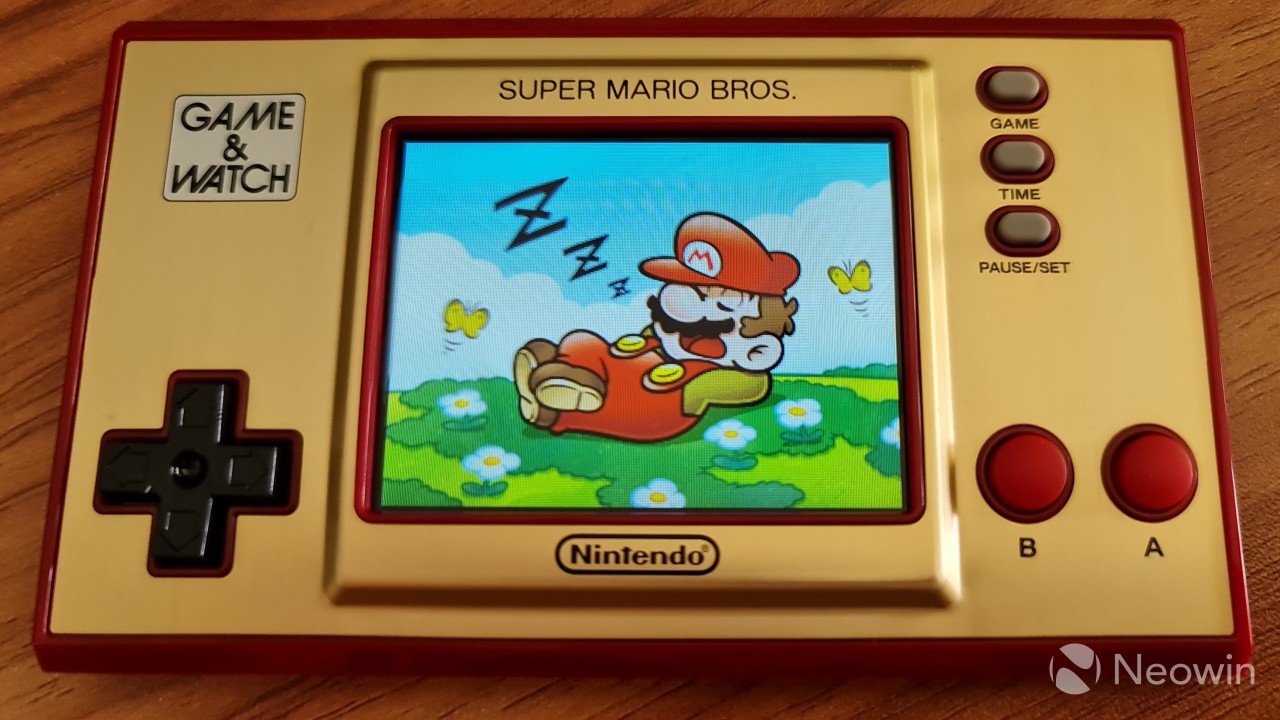 Another neat little bonus for Nintendo fans is the artwork that's displayed after the device has been idle for some time. After three minutes of inactivity, the Game & Watch goes to sleep, but before it does, you get to see some art of Mario and other characters, which varies depending on the time of day and what you were doing before the device was idle. The artwork depicts Mario and Luigi's outfits in the same colors as in the games featured in this package instead of their official colors, which gives them an interesting touch. These colors weren't even used for official artwork when the games released, so it's definitely an interesting decision by Nintendo.

The Game & Watch: Super Mario Bros. is probably one of the coolest collectible items Nintendo has made. It's a wonderful blend of products that defined the early days of Nintendo's history in the gaming market, combining the premium-feeling design of the Game & Watch with the most iconic game of the 1980s. The color display is beautiful and a perfect fit for these titles, and the controls feel really good overall. 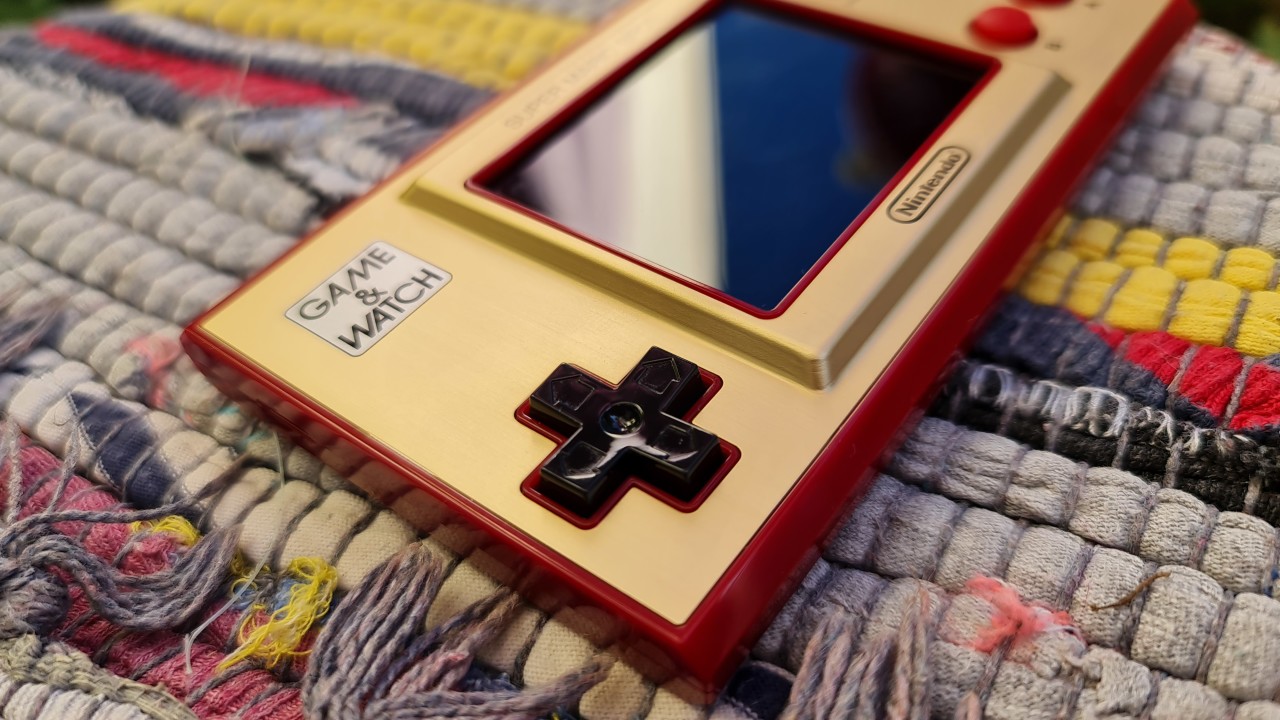 I also love all the little extra bonuses thrown onto the package, like the clock, the special artwork, and the Game & Watch: Ball game. Plus, some of the options added to the games make it much easier to actually finish them, ditching the old-school approach of having to beat games in one go.

The small and thin design can get a little uncomfortable for long play sessions, but it stays true to Game & Watch brand, and this is more of a collector's item than an ideal way to play these games in my view. I still think it's a great way to play them, and if you're a parent trying to introduce kids to the early days of Nintendo, then this will likely be a perfect fit for their small hands. 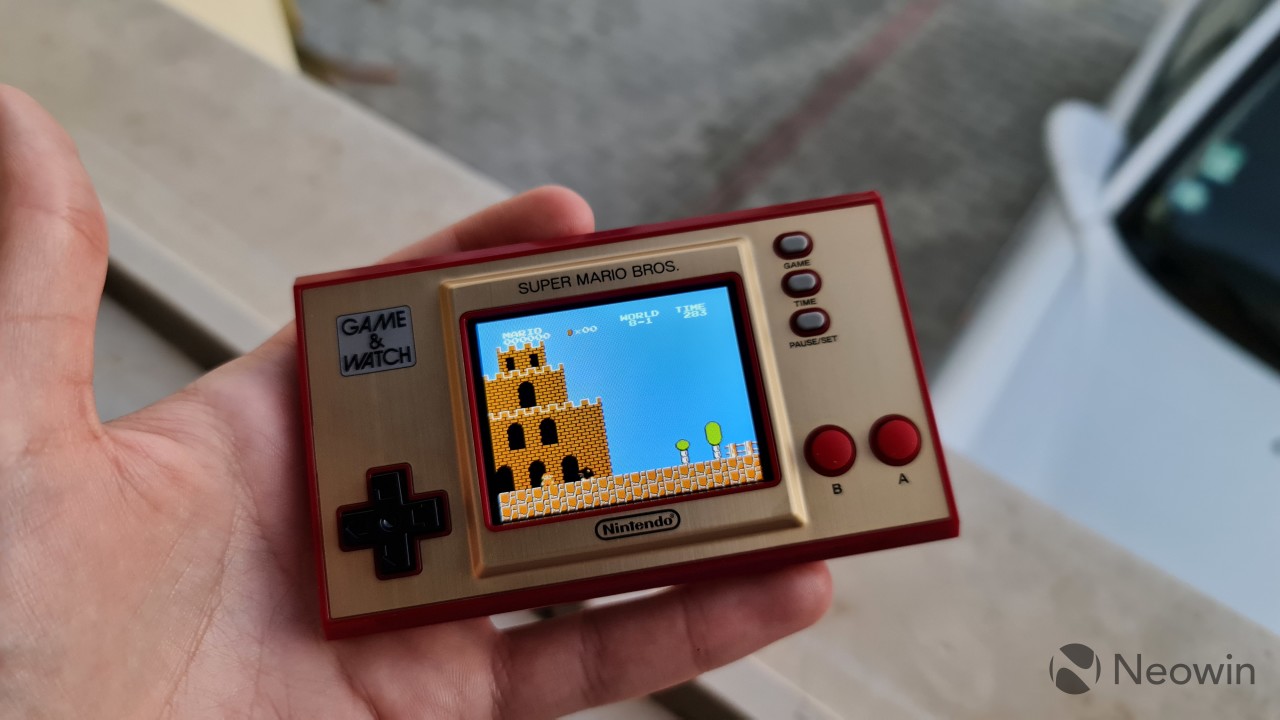 It can be hard to justify or evaluate the price of a collectible. Like I said, it's not the absolute best way to play these games, and the fact that it only has these three games means it's definitely not meant to be compared with actual consoles. But the way it brings together elements of Nintendo's history, plus the bonuses thrown in here, do make this a fantastic device for die-hard Nintendo fans like myself. If you happen to be one, too, then I think the $50 price tag is definitely justified.