Google has been awarded a patent by the United States Patent and Trademark Office, which details the process of converting virtual conversations between people into comic strip format.

The patent, which would enable development of technology for "Self-creation of comic strips in social networks and other communications", was approved on 31st December by the USPTO. The process described in the patent includes selecting past conversations and converting them into comic strips which can be shared to various social networks.

It is observed in the conceptual images, that users will be able to customize the comic strips with various themes in addition to cartoon versions of themselves. One of the images from the patent filing mentions the word "kwips" in referring to the comic strip which could be a suggested name for the service if and when it becomes a reality. 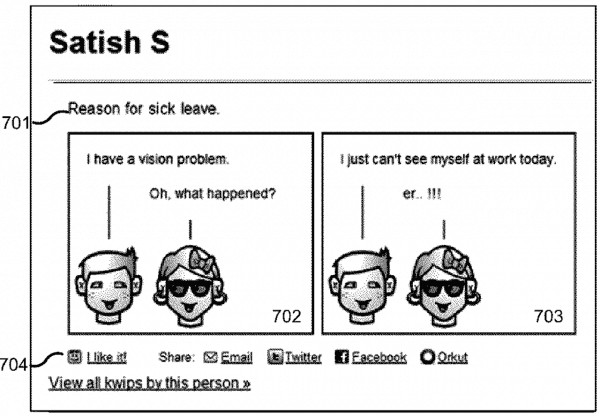 Google mentions that the comic strips can be used in multiple situations which may not necessarily be funny, such as conversations between politicians, in order to better present the flow rather than regular text on social networks.

As with all patent filings such as the curved iPhone, it's anyone's guess whether the technology will ever become a reality, but the concept as presented in the filing looks quite interesting and may even revolutionize some aspects of conversing over the internet.