Google has reportedly begun rolling out a new feature which allows those on an iPhone or iPod Touch to preview a website before it's loaded when using their search site.

A companion of the desktop version which was rolled out late last year, 'Instant Previews' for iOS devices utilizes a Safari tab-like page built completely using HTML to show users a snapshot of what the website looks like before they load it. Benefits of the desktop version include the fact that you can quickly compare results visually, and pinpoint relevant information thanks to the fact that text similar to the search query is highlighted.

The mobile edition -- which appears to be rolling out slowly and is not currently available for everyone -- is activated by selecting a small magnifying glass to the right of search results. Obviously, given the difference in screen size between desktops and iOS devices, Google has created a nifty new interface for the tool, with users shown a Safari tab-like page which allows for scrolling sideways between the results, and when selected allow you to visit the page.

The results page also includes the title and description of each site alongside the URL when you flick through, and dots at the top of the page showing your progression through the query results.

The feature is only present on Google searches from the United States for the moment, and with Google yet to confirm the tool's public availability, it's unclear when it will become available for everyone.

The roll-out of the new tool follows a recent push by the search giant to improve their mobile offering, including the recent debut of "Google Instant" which suggests search queries and displays them as you type, and a number of tweaks and improvements in the mobile editions across the range of other Google services such as Google Docs, with editing on an iPad recently enabled. 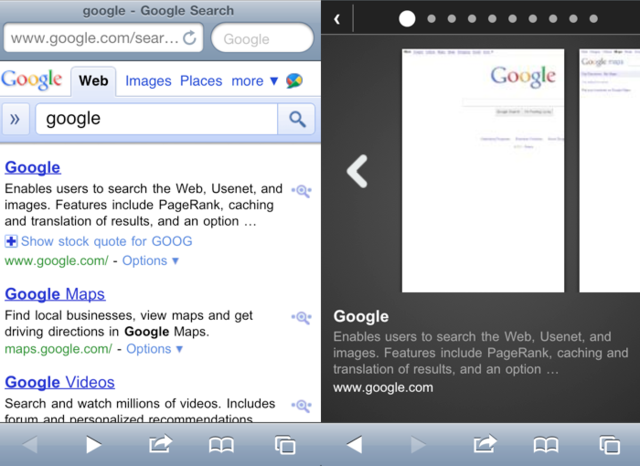