Google's Chrome browser has quickly become very popular since its release on September 2, 2008, but one issue many have is that it's currently Windows only. Well, it appears that this will all change sometime in the hopefully-not-too-distant future, as Google's 'Chromium' browser is now available as a pre-alpha for Ubuntu users. As you may have noticed, the browser is called Chromium at the moment, as Google's Chrome is a browser based on the Chromium project. Once this has been officially released, it will be called Google Chrome. 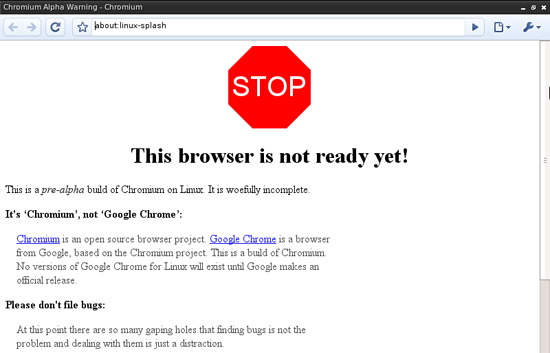 If you're using Ubuntu, or a distro based on Ubuntu, you can add the following repositories and get a chance to play with Chromium yourself:

Once this is done, sudo apt-get install chromium-browser in a console window should get you up and running, then followed by a chromium-browser [enter] to open the program. Neowin Ubuntu users, please post in the comments and tell us how it goes. A slight warning though: this is a pre-alpha, so it's obviously very feature incomplete, so if you don't mind going without the tab and bookmarks bars and options menu, you'll have a great time.