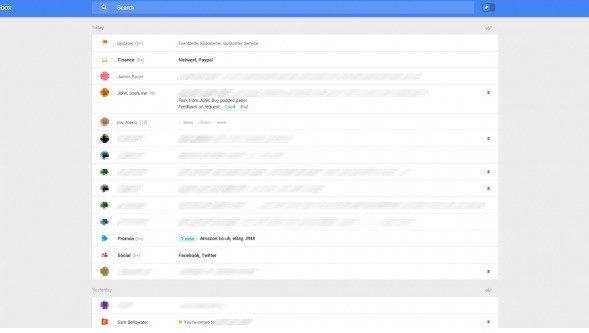 Google is looking to establish a common design language across of all its applications and will also look to help third-party developers adapt its new look as well. This initiative is called Quantum Paper and we will likely see it unveiled at Google’s upcoming I/O conference that kicks off later this month.

The idea is pretty simple, Google wants the same look and feel for its services no matter what operating system you are using. So that means Android and iOS apps will have the same look to them and even web applications will follow the design characteristics.

Quantum Paper will introduce new visual elements, interaction elements and even new buttons. Geek.com recently got its hands on a new Gmail layout that the company is testing and this is reportedly part of the Quantum paper design language.

If you are thinking that a common design language across every OS and every app sounds familiar, it’s because Microsoft has done the same thing with its ‘metro’ design language. While it is now referred to as ‘modern’, metro was the root of the flat movement that every company, including Apple, has now adopted.

Google’s Quantum Paper design will be a step in the right direction for the company as a consistent UI experience on any platform is win for the consumer.

With Google I/O kicking off June 25th, we won’t have to wait too long to see what the company has been working on and how Quantum Paper will fit into the company’s next generation of Android and other services.