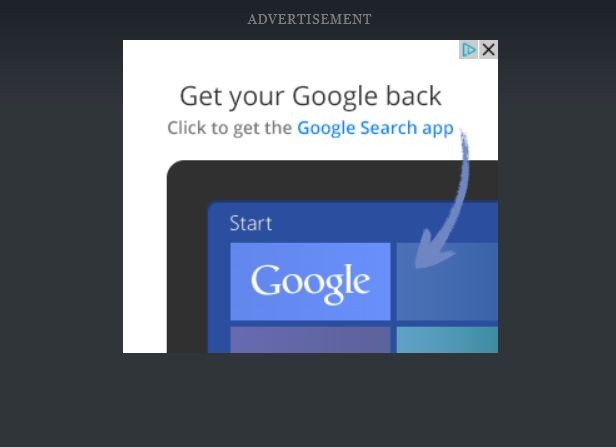 As Microsoft takes Google to task for its search and paid ad mingling, Google has also been trying to promote its own support for Microsoft's new Windows 8 OS in the past few weeks. In October, Google launched its own Google Search app for Windows 8 which can be downloaded right now in the Windows Store.

What Google didn't say, at least not openly, is that the company is also running a banner ad campaign on a number of web sites that promotes the Google Search app. This would be unremarkable except for one thing; the ads, such as the one shown above which was found on Forbes.com, can only be seen by people who have Windows 8 installed on their PCs.

The banner ads appear when a user is accessing a website on Windows 8 on the "Modern" version of Internet Explorer 10 as well as on the desktop version of IE10. The ads also appear if you run Google's Chrome web browser on Windows 8, which indicates that this ad push is tied into Windows 8 itself, and not just for one specific web browser. If a user clicks on the banner ad, he or she is sent to the GetyourGoogleback.com webpage, which shows them how to install and use Google services on Windows 8.

We have sent an email to Google asking for more information about this somewhat stealthy banner ad campaign but as of yet we have yet to receive a response.

Update: One of our readers says he has seen this ad when he goes to websites on Windows 7 PCs as well. However, in our own experience using both Windows 7 and Windows 8 PCs over the past couple of weeks, the Google Search Windows 8 ad has appeared for us exclusively when we use Windows 8 and has yet to appear on the same sites when we use our Windows 7 PC.