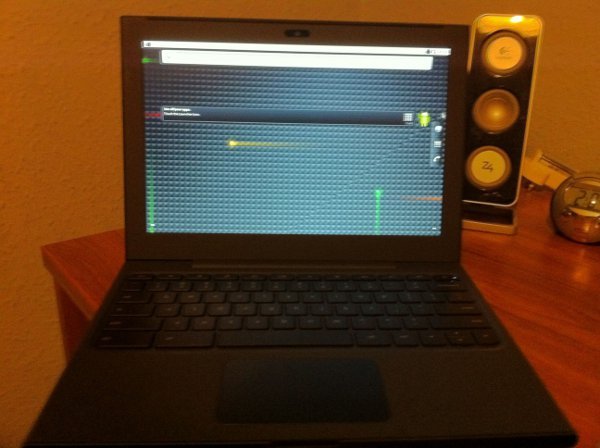 Last week, it was Windows 7 and Mac OS X. This week, Google's Cr-48 netbook is again in the spotlight after a user managed to get Android running on the diminutive device.

Details are scarce, but Chrome OS Site spotted this rather succinct tweet from developer Liam McLoughin, also known as ''Hexxeh'', proudly proclaiming he had shoehorned Android onto Google's netbook. Linked was an image showing a fairly plain, but clearly Android, home screen, though without any sign as to which flavour of the mobile OS was running.

Fellow Twitter user coggy9 later reported having found the files Mr McLoughin used to make his Android install possible, but was quickly put in his place by the developer, who claimed the files were not complete and coggy9 should ''leave them for now.'' Despite the warning coggy9, also identified as Adam, linked a photo apparently also showing a working Cr-48 Android install.

Last week, Hexxeh unveiled ''Luigi'', a firmware toolkit for the Cr-48 that allowed a user to install any operating system on the device, though not without some fairly-involved tinkering beforehand. Insanely Mac forum user damis648 has written a guide to putting Mac OS X Snow Leopard 10.6.5 on a Cr-48 while between them, users at the chromeoslounge and Something Awful forums got Windows 7 going, albeit without a working 3G modem. chromeoslounge user jm77 has also tried his hand at putting together custom ChromeOS builds for users to try out.

Google's netbooks, sent out to select testers as part of a Chrome operating system test program, have proven a hit with curious users, with a mini-community having sprung up to test the capabilities of the devices.