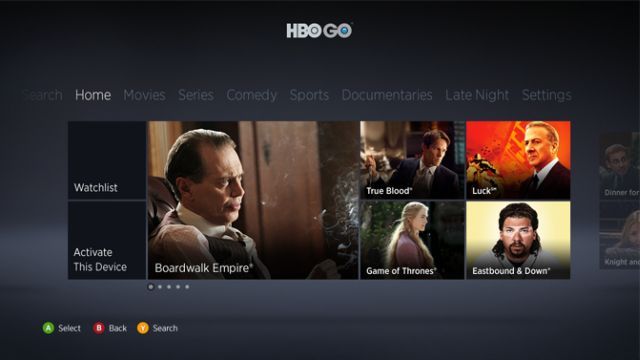 Microsoft has been beefing up its non-gaming download services for its Xbox 360 console for a number of months now. Today, Major Nelson (aka Microsoft's Larry Hyrb) announced that three more streaming video apps are now available for Xbox LIVE Gold subscribers in the US.

The biggest of the three new releases is HBO GO, which allows subscribers who have access to the pay TV network a way to check out all of the currently running movies on the network at any time. It also offers on-demand access to full seasons of current and past HBO original shows. The app also has support for Kinect, allowing you to navigate through the catalog of titles with gestures, or to perform voice-powered searches for content.

Subscribers to Comcast cable TV can also access a new app: XFINITY TV. The app allows Comcast users to watch content from many of the networks that it has access to. Finally, pro baseball fans can now download and use the MLB.TV app, which offers videos of both live and on-demand Major League Baseball games, along with other features.

The Verge reports that according to Microsoft, Xbox 360 users are now spending more time watching TV shows and movies and listening to music via the console than they are playing multiplayer games (although we do wonder if that statistic would change if single player only games are added to the mix). Xbox LIVE Gold members are now spending an average of 84 hours per month on the online service.